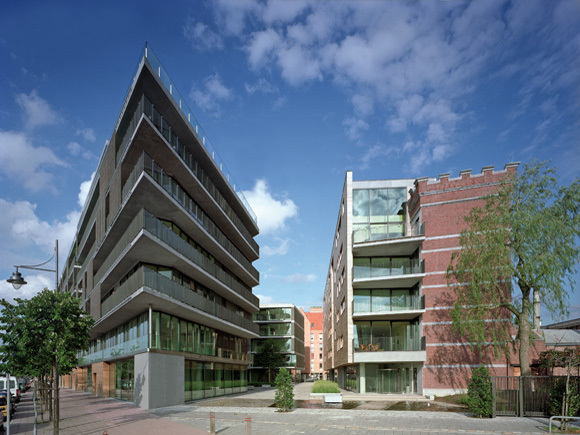 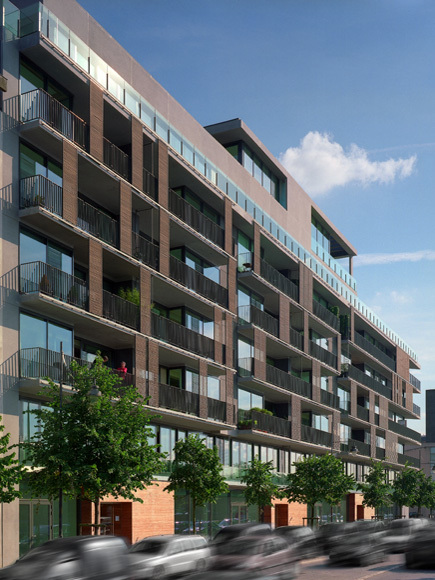 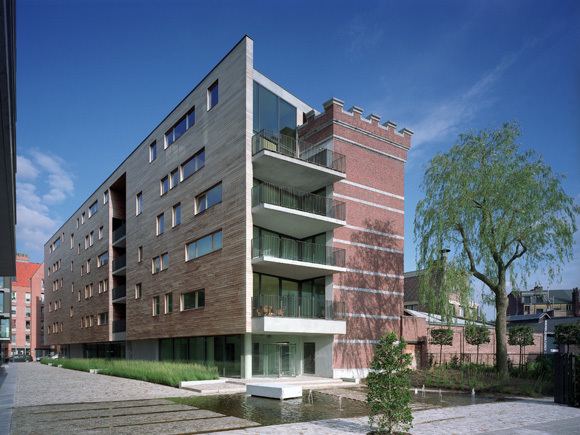 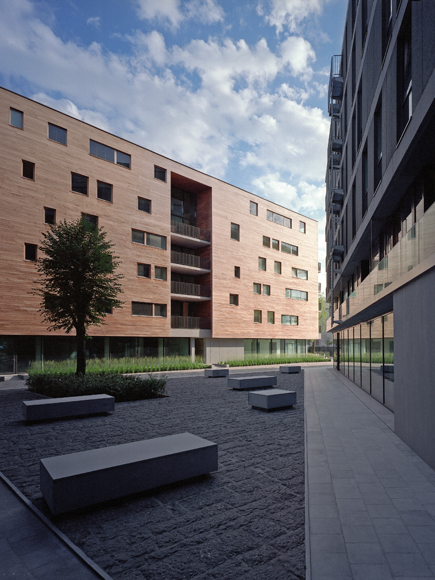 The area between Cockerillkaai and Timmerwerfstraat looked chaotic because it lacked design unity. Due to the existing relationship between a number of large buildings – namely the ‘Zuiderpershuis’, a block of apartments on the corner and a museum (Muhka) – the perspective had already been determined by and large. Conix Architects felt compelled to put an end to this mish-mash of building styles. Their final organization of the buildings lies between urban compacting and spatial perception.

The interaction of horizontal lines on the Cockerillkaai (Block A) – interrupted by vertical strips – serves as a counterbalance to the massive structure of the Muhka museum. Conix Architects used lines more or less everywhere to unite the designs of these buildings and thus create a unique and recognizable character for the entire complex.

Only in the case of Block B – to accommodate the extension to the warehouse – a closed design was used for the north-facing façade, using materials consistent with the specific historical background of the warehouse. The horizontal detailing of the façade is limited to the two end walls.

The façades of Block A and Block C on Timmerwerfstraat are interrupted in places to make incidences of light and air possible in the sharp angle between the two streets. Consequently, the façades reflect the existing building outline of the street. Because of this design choice, Timmerwerfstraat has become more airy and spacious, in contrast to the enclosed and massive façade of the social housing on the other side of the street.

Block B in Leuvenstraat repeats the horizontal theme but in a more fragmented way with openings. By placing the building further back – compared to the building line of the warehouse – one has a view from the Schelde docks of the towers of the 'Zuiderpershuis'. By not connecting the building to the enclosure and using mostly glass for the ground floor, the 'Zuiderpershuis' can be seen in its totality. The detailed construction of the end wall on the Waalse Kaai opens up the Leuvenstraat, allowing for a clear view of the entrance to the Muhka. Conix Architects created recreational spaces here with water features and stepping stones.