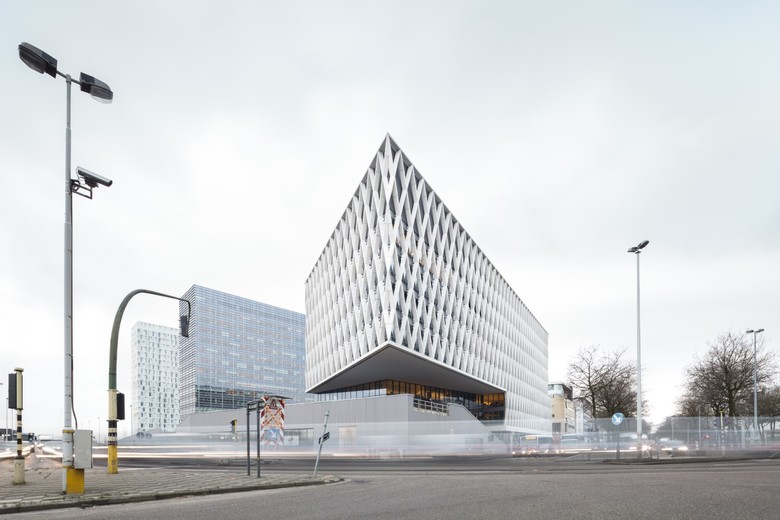 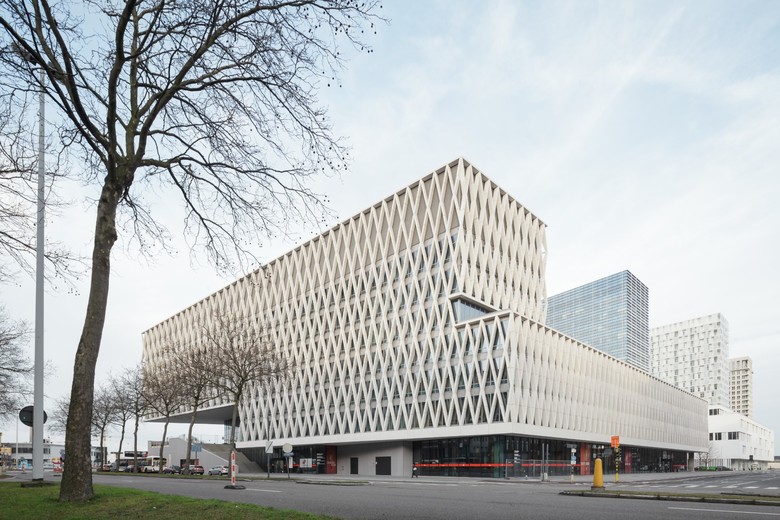 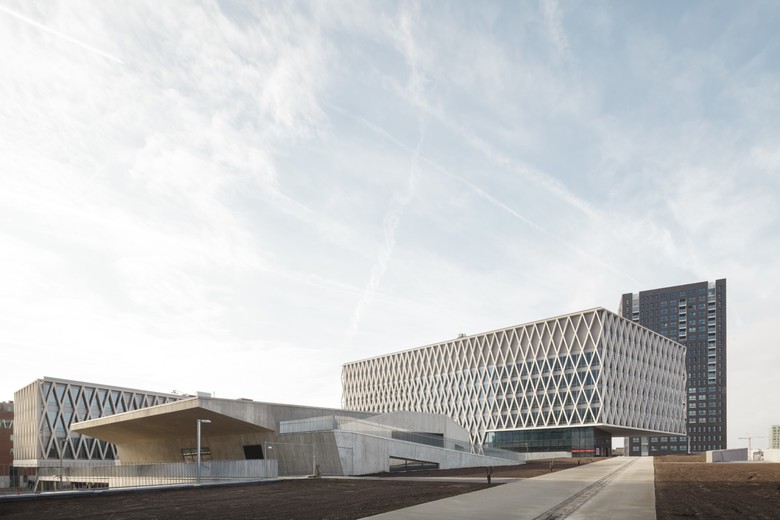 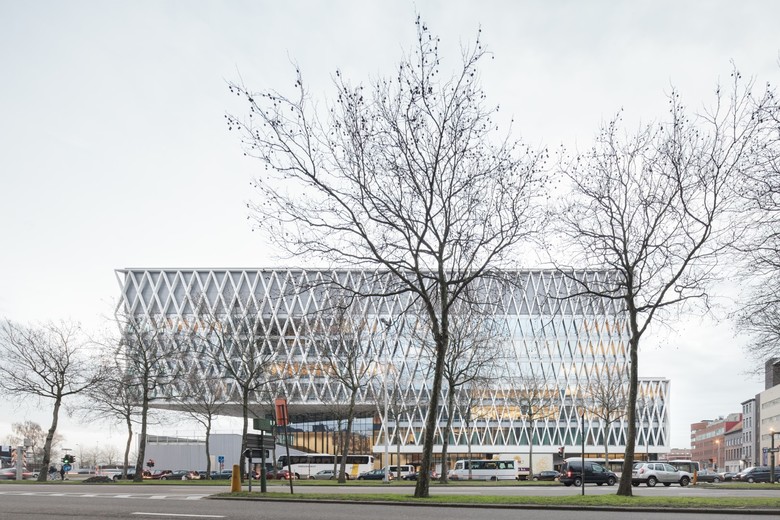 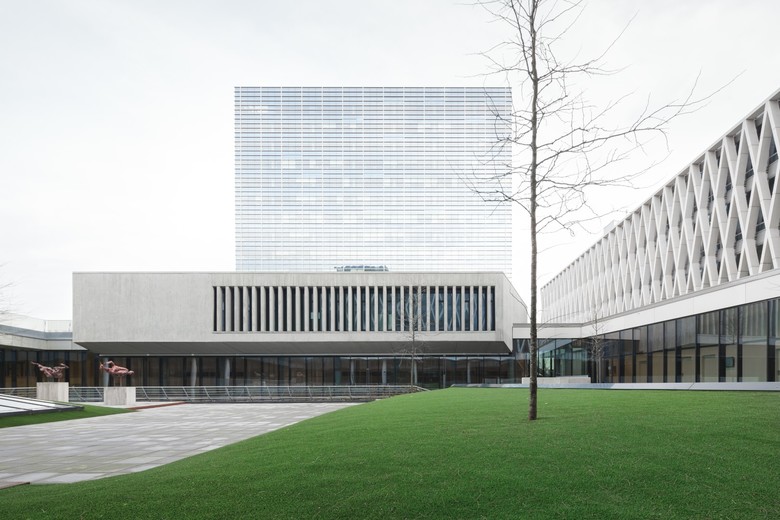 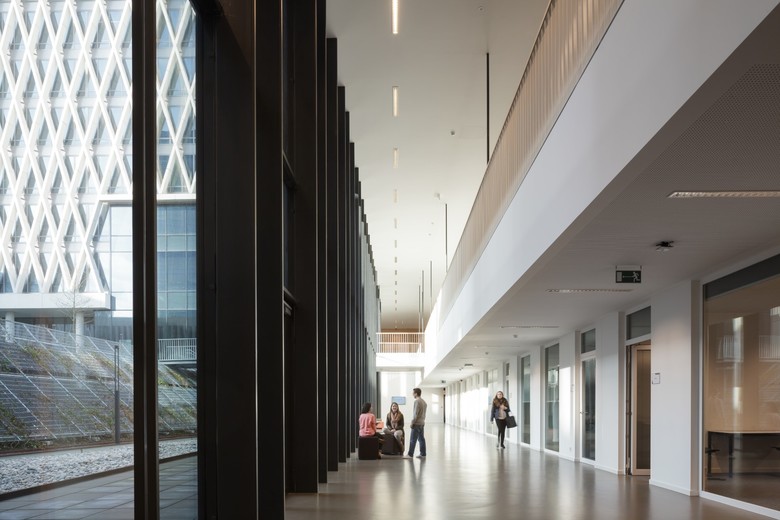 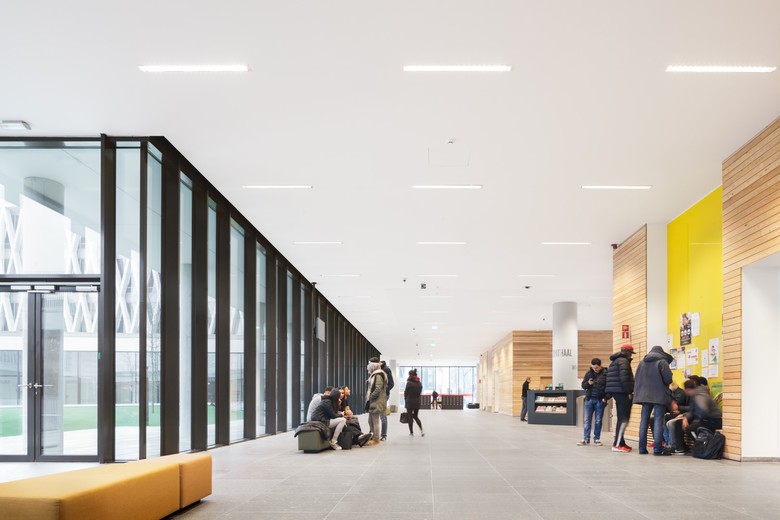 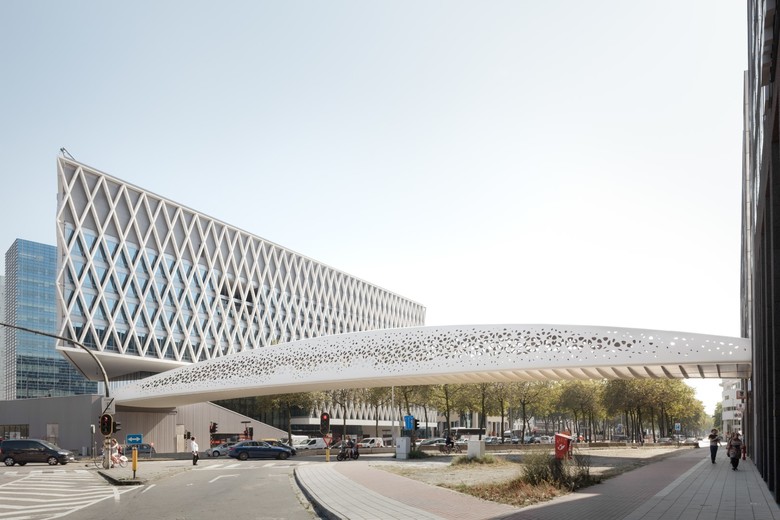 At the tip of ‘Park Spoor Noord’, Artesis Plantijn University College has realised its new campus. The school building marks the start of the Leien boulevards. The exceptional location requires an exceptional, even iconic building. The first notable aspect of the design is the impressive, cantilevered volume with its diamond-shaped, external load-bearing structure in concrete. Viewers who look beyond the monumental nature of the facade will see that the building’s best features are very subtle.

COMPACT CITY CAMPUS
The first gesture involves limiting the height of the building and viewing the school as a ‘compact city campus’ nestled in the urban fabric. The building was designed not to be just another tower among many, but to align with the existing buildings along the Leien.
The loss of surface area is compensated by an additional ‘underground’ level and the cantilevered volume. The compact city campus is both landscape and city. Like a real campus, the university college is open and accessible. The central, green patio can be seen from the street. This patio is the heart of the campus.
The design aims to realize the idea of an "open" campus within a limited building block. This design resolutely opts for a central green patio from which the common main functions are accessed through a glass walkabout. Due to its strong architectural expression and bold volume, the building acts like a proud new ‘character’ in the city.

PARK RAMP
The second design gesture is the integration of the ‘park ramp’ – a public walking and cycle path – over, along and through the building. The school is both building and infrastructure. The park ramp brings the green park into the school and connects to a bridge for pedestrians and cyclists, based on a design by Laurent Ney. The bridge connects Park Spoor Noord to the Eilandje on the other side of the Leien. Unlike the patio, the park ramp is open to the public.

GATEWAY TO THE CITY
The third design gesture is the monumental flight of stairs under the cantilevered volume. The covered, public outdoor flight of stairs not only gives the school a recognizable entrance, it is – like the park ramp – a generous gesture. The private school building gives public space to the city and its inhabitants. The flight of stairs is the high point of the project. This is where all the gestures converge. It is a busy location where the Leien, the cycle bridge, the park ramp and the school meet. It turns the building into a gateway to the city and to the park.