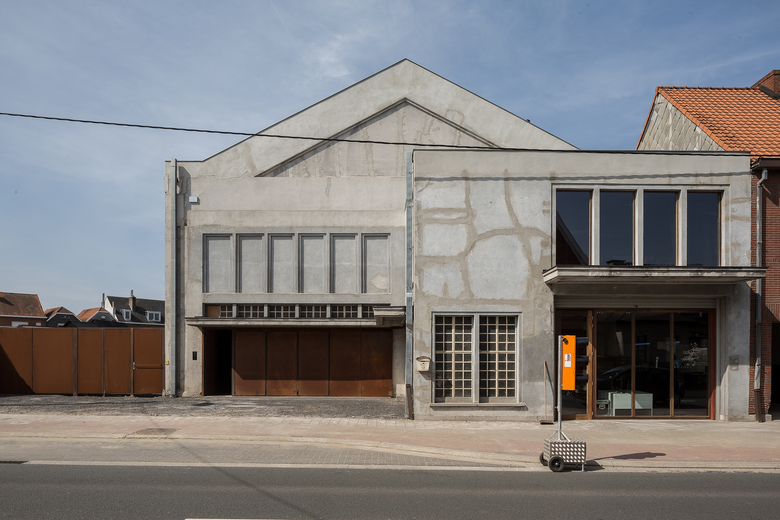 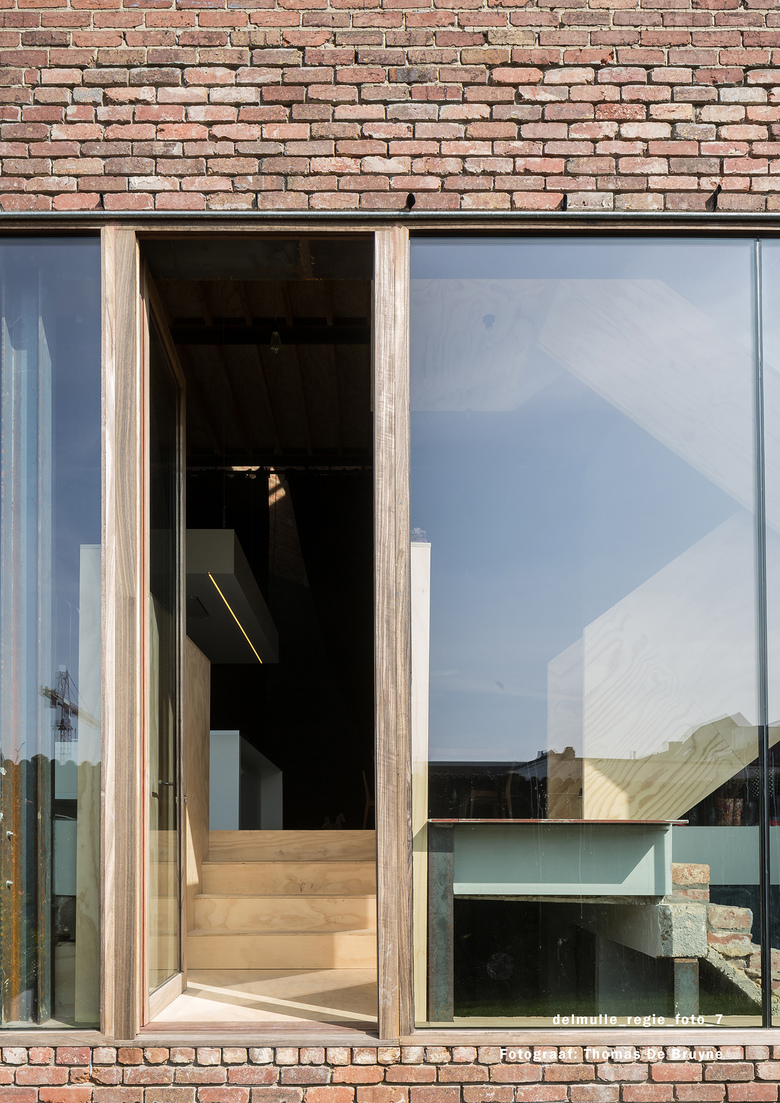 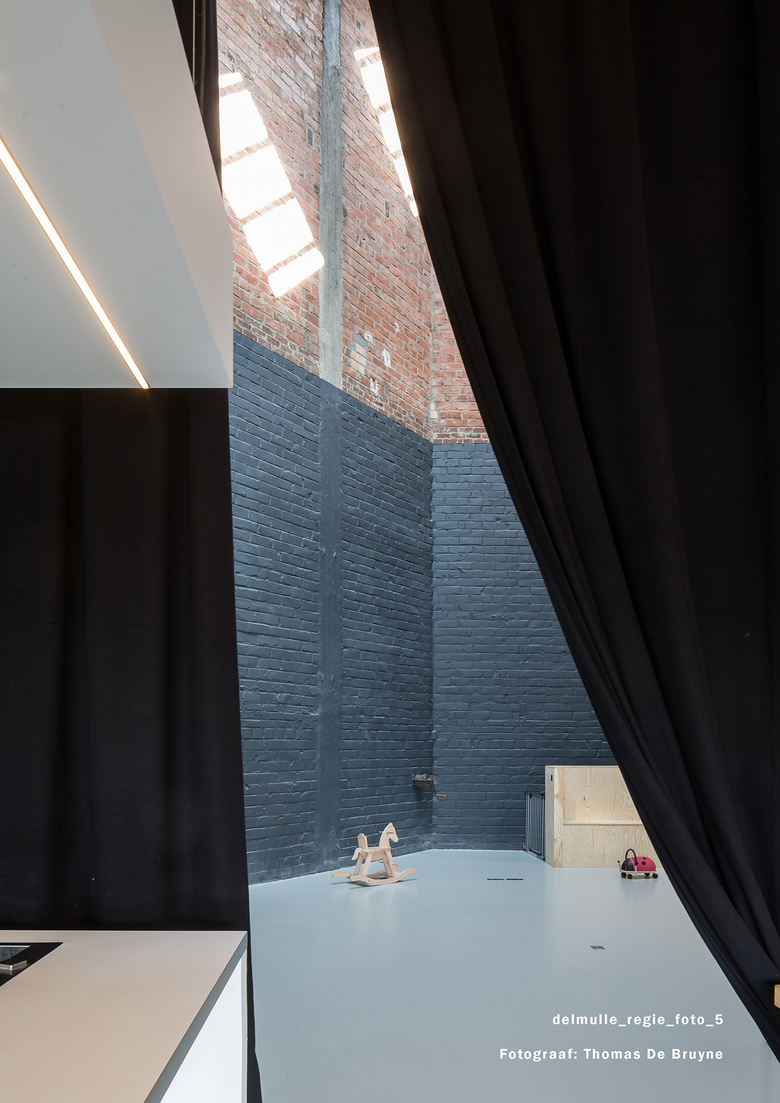 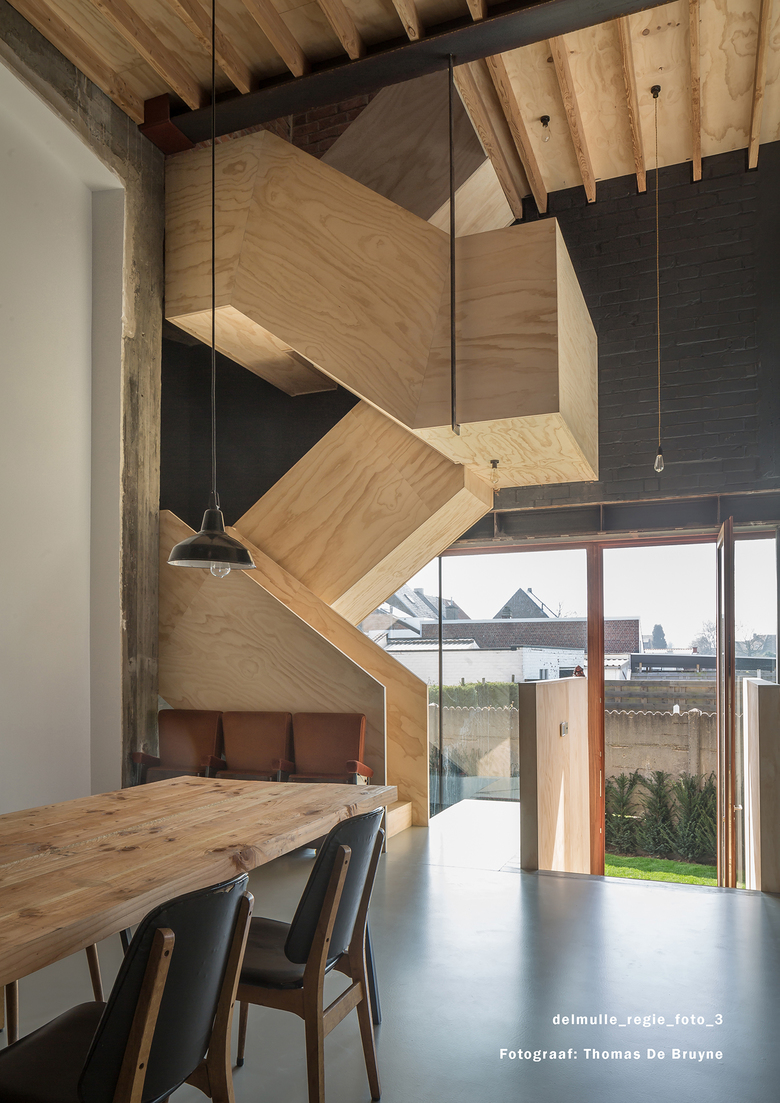 1956: Raymond ‘Mondse’ Wollaert was a well-known and beloved citizen of Merelbeke. With his wife Germaine Willems, Raymond owned a butchery and a café. In the fifties he built the film theatre adjacent to it. This cinema was thereupon transformed into the famous banquet hall. The name REGI was actually composed from the first names of the Wollaert family: R (Raymond), E(Etienne, son-in-law) and GI for Germaine and Gisèle (daughter). The cinema was opened in February with a big dance party. The next day, the chairs were speedily put in place for the first film Daddy Long Legs with Fred Astaire and Leslie Caron in the leading roles.

2017: Studio Regie is a production and post-production studio, searching for a location for film productions. The interaction and relationship between the current activities of the production studio and the history of the cinema were a unique perspective to work with.

Besides the production activity, there is the intent to let the characterful hall to a larger audience for specific occasions, such as receptions, openings, exhibitions, film shows, corporate events, (wedding) parties, performances and alike. This way, the unique venue will occasionally be opened in a controlled environment and thus keep the historical building rooted in society.

The basic idea of the whole conversion is based on maintaining the existing character and assets. This means that all of the assets need to be handled with a large dose of caution and wariness. They were defined by their historical value, structural condition and architectural added value.

The building is divided into three parts.

The cemented entrance building with the entrance hall and cloakroom was summarily renovated and stripped of all its annexes to install a large gate for deliveries and an (emergency) exit to the street. In this building offices, the entrance and the kitchen/catering facilities are located. The auditorium itself is rectangular and is located under a large saddle roof with steel trusses. The front and rear façade are (and were) curved to improve the acoustics. Most of the old elements were still present (as discovered during the removal of a more recently installed sheetrock ceiling) and they remain, with the exception of a new coat of paint, in their original state. The curved ceiling also preserved its existing form and structure.

The corrugated metal sheets on the outside of the auditorium were removed and the underlying brick façades were renovated. The stage tower at the back of the plot is a concrete skin with infill brickwork. It has a large concrete ceiling which formerly accommodated the pulling installation for decor lighting and scenic backgrounds.

The inside and outside brick and concrete walls of the stage tower will be preserved. This brick tower, with new windows added to create light and view, functions as a hull for an autonomous wooden residential volume (with bedrooms and a bathroom), as it was floating in the tower. This intervention does not break the old (existing) atmosphere of the extremely high tower volume, but it reinforces its character.

The former stage itself will be used as a living space for the home. The old opening of the stage is carefully closed and acts as a white screen for the studio, however it can easily be opened again in the future if needed. The light on this living platform is partly coming from a horizontal window that opens to the entire garden site, and partly from the sizable existing skylights that bring zenithal light from the high ceiling to the floor.

The existing materials are preserved as much as possible and even consistently used in the new interventions. Also, characteristic elements of the interior are preserved and complemented with wooden constructions and offices.

In this conversion, the unique historical setting of the building remains untouched. By means of thoughtful interventions we upgrade the existing framework architecturally but also through use and function. By giving the hall a renewed (cultural) function in line with its history, this icon does not only exist, but can settle back in the present-day society of Merelbeke.