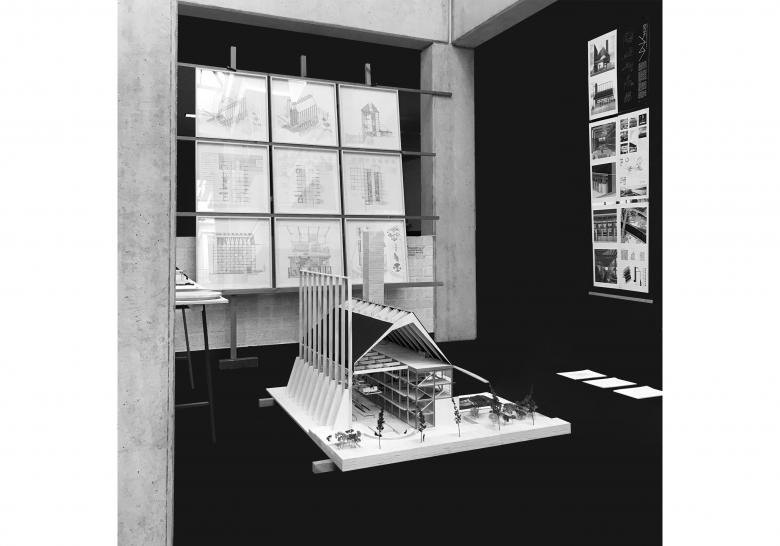 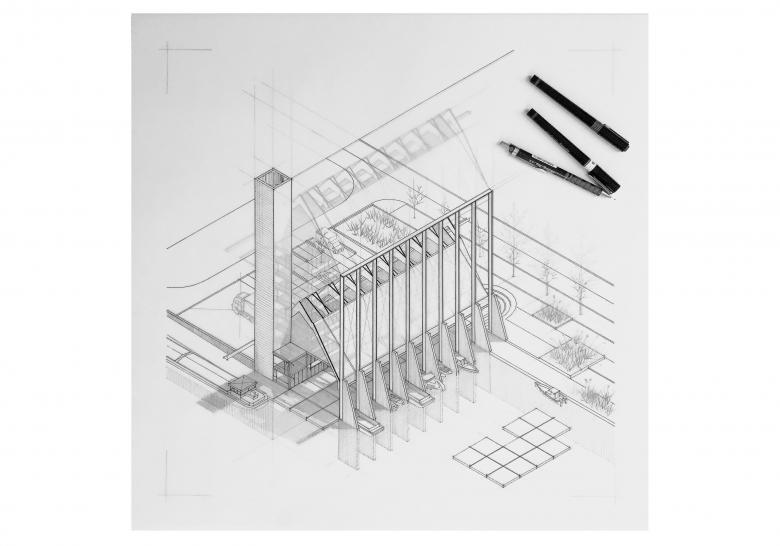 Isometric view of the growing proces of the building, in 9 phases over a period of 20 years.
© Yves Dupont 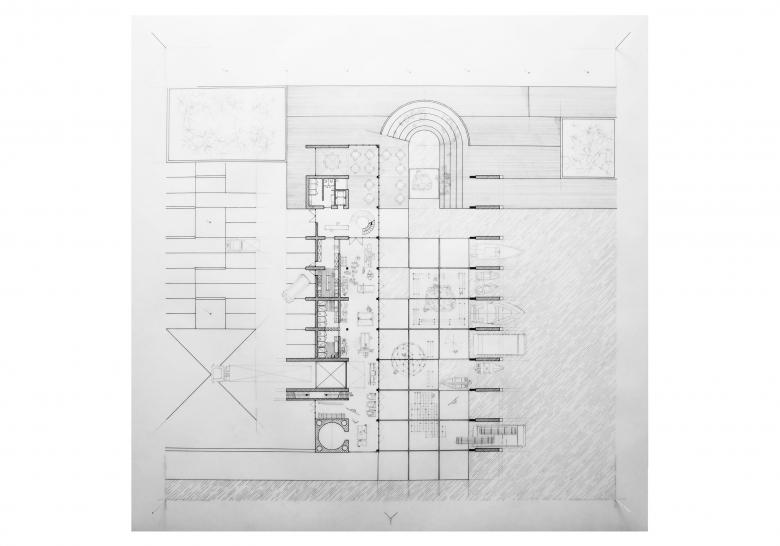 Groundfloor plan - “ The cathedral is set as a hive of construction activity, displaying a wide variety of topological configurations."
© Yves Dupont 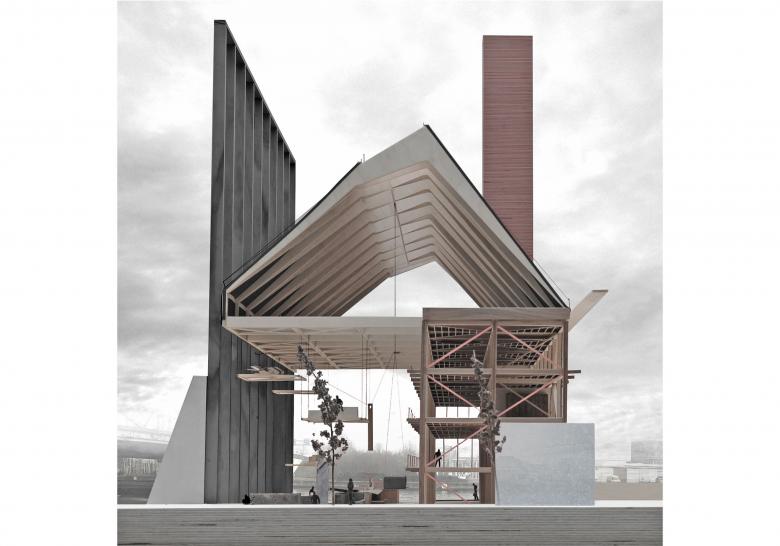 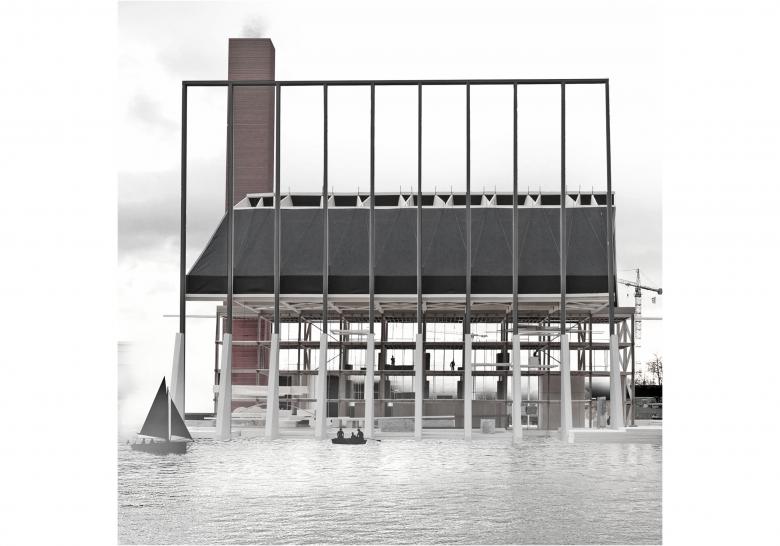 Side elevation of the Vakhuis, partially standing in the Albertcanal
© Yves Dupont 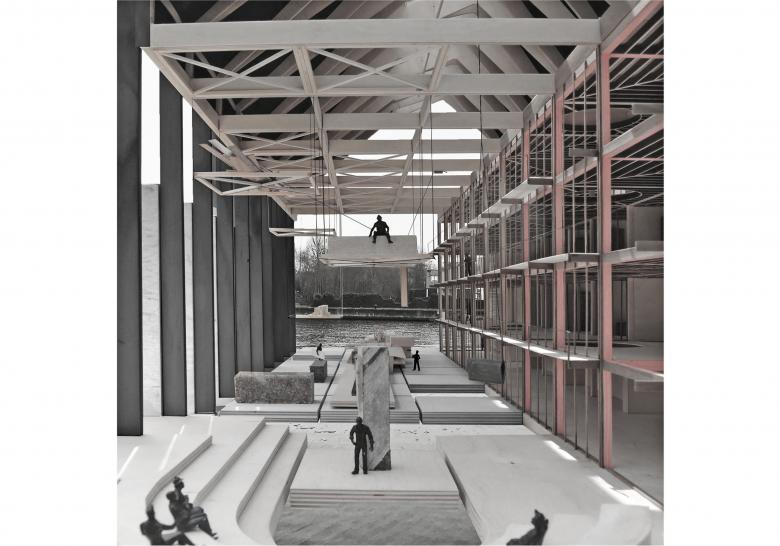 Interior view of the Vakhuis with the ateliers on the right and the pontoon workspace on the left.
© Yves Dupont

A house for craftsmanship in Belgian Limburg

The project concerns the establishment of a house for craftsmanship in Belgian Limburg, also known as the VAKhuis. A place where craftspeople, designers, local producers, small companies as well as builders and students can go for workshops, advice and advertising. A first step in promoting a local manufacturing industry within a global mindset.

The employment in the Belgian province of Limburg, has long been dominated by the mining industry. These mining concessions formed a strong economic backbone for the area, creating a multicultural and technically strong educated population. In 1958 the coal crisis lead to the closure of the mines. A local economic crisis was avoided due to the growth of big-scale multinationals like the tech. giant Philips and car manufacturer Ford. Fate and globalization struck on October 24, 2014. Ford announced its closure and translocation. With the closure of Ford, after the closure of the Belgian coal mines, the economic backbone of my province Limburg, where I’ve grown up and lived my entire life, got a second hit.

A ‘Strategic economic plan of action for Limburg’ was rolled out by the Flemish government. This plan commits itself to take concrete actions during a six year planning period, realizing projects that help to recover the Limburg economy. This based on five different business cases: manufacturing industry, logistics & mobility, leisure economy & experience, Energyville and the creative economy. Today, in 2020, several new projects or ‘economic incubators’ such as a cultural center, a technology center, a science park for renewable energy, an ICT-tech center, etc. have already successfully been established. Most of these initiatives are characterized by academic or technological research and actions while there is still a lot of work to be done concerning the business case: manufacturing industry. For this reason my thesis and research into local practice in a global economy, in architecture, art and design where focused upon this. In 2010, no less than 85,000 people worked in this sector in Limburg. A competitive manufacturing industry is therefore of great importance for the innovative strength and prosperity of Flanders and Limburg. In the past, the government always kept itself holding on to large bulky companies. Today in the industrial landscape and manufacturing industry, evolution and innovation are the key words: “not the big will eat the small, but the fast will eat the slow ”. International studies underline the importance of local production for a sustainable and vibrant innovation ecosystem. That’s why I stated: “If we want to focus in Belgian Limburg on a manufacturing industry in the future, we will be guaranteed competition from multinationals that exploit the poorest areas on earth. An unfair competition where the high wage costs will continue to affect us. That is why we must focus on what a global monoculture can not deliver, namely high-quality and sustainable products combined with extraordinary craftsmanship and technical knowledge.” This ideology culminated in my graduation project, namely the establishment of a house for craftsmanship in Belgian Limburg.