Wim Goes (°Ghent, 1969) obtained a Master’s Degree in Architecture at the Sint-Lucas School of Science and Arts in Ghent/Brussels, Belgium. He worked with architect H. Koch on self-built low-cost housing and also temporarily in workshops such as Atelier Maarten Van Severen.

At a very early stage he was confronted with contemporary art. Meeting and discussing with artists and art curators changed his vision on the position of people in and towards art and architecture, a position allowing the human presence to complete the art and architectural work. This attitude, being close to Reverse Perspective, is an ongoing investigation both in the office and in academic research since.

In 1999 the practice Wim Goes Architectuur was founded, partnered by Anja Houbaert and Tim De Messemaeker. It has been awarded the Belgian Prize for Architecture, the Belgian Award, Architecture Award Province East Flanders, the Award of the Order of Architects (BE) and the Architectural Review Award (UK).
Their work has been published widely in architectural magazines such as A+U (JP), the Architectural Review (UK), Mark Magazine (NL), D’Architectures (FR), Casa da abitare (IT) and C3 (KR).
Wim Goes has been teaching at the KU Leuven faculty of Architecture, Sint-Lucas Ghent/Brussels in Belgium since 2005.
He participated in the Glenn Murcutt Masterclass (2005) and the New Zeeland Masterclass with Ian Athfield (2008).

He was invited as a visiting scholar at the Victoria University Wellington (NZ) in 2017. He lectured and/or was a guest critic at the EPFL in Lausanne (CH), the Academy of Architecture in Mendrisio (CH), NTMU in Trondheim (NO), RWTH in Aachen (DE), the Technical University in Graz (AT), the University of Auckland (NZ) amongst others.

The projects of Wim Goes Architectuur have been featured in the Belgian Pavilion of the 15th International Architecture Biennale in Venice (IT), the 2016 Triennale in Viserum (SE), the Royal Academy of Arts in London (UK), the former building of the Ministry of Education in Rio de Janeiro (BR) and in exhibitions at universities such as ETH Zurich (CH), the Academy of Architecture in Mendrisio (CH) and at the Victoria University in Wellington (NZ), curating an exhibition On Reverse Perspective. 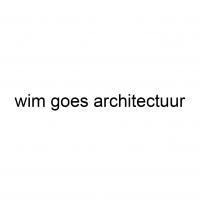