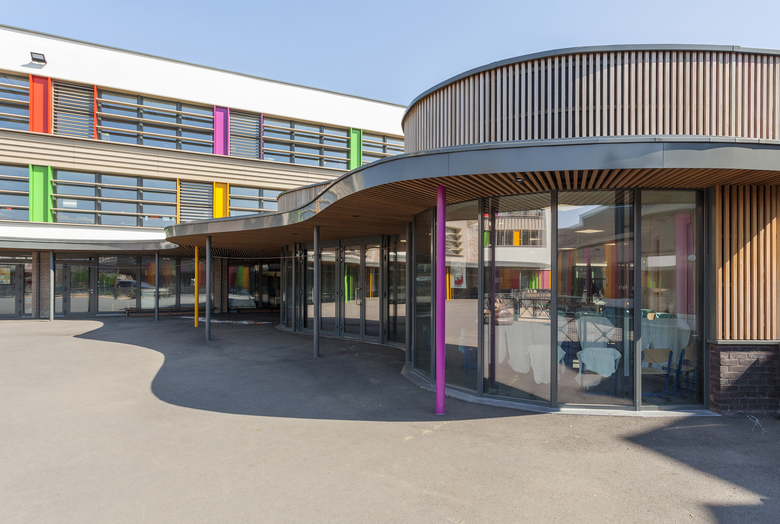 The ‘Site Van Oost’ project takes part of a larger sustainable development plan for the commune of Schaerbeek (Brussels), aiming to revalue its rich 19th-century architectural heritage and urban patrimony and to revitalise the municipality. For the Van Oost site, an ambitious urban project was set up that had to equip the merely residential quarter with extended public services and expand the housing supply. The project ‘Site Van Oost’ won the competition that was launched for the conception of a mixed-use development with two schools buildings, each containing a kindergarten en a primary school, a sport hall and 11 appartments. A particular attention has been paid to the project’s integration within the neighbouring built environment, the two adjacent streets being characterised by traditional Brussels terraced houses. By the transformation of the building block’s interior to a public space and the partial conservation of the streets’ architectural patrimony, our project wants to affirm the new identity where the commune is driven to, all in respect for a place that is anchored in collective memory.

Along the street ‘rue Van Oost’, the existing ‘bel-étage’ houses, being part of the architectural continuity of the street, are integrated in the new project. They will be restored and transformed in apartments, which have their own accesses to the street and function independently of the public functions on the site. One townhouse in bad state will be replaced by a new building, very fordable in order to constitute one of the two entries to the schools and schoolyard at the inside of the building block. The second entry is situated at the other adjacent street, the ‘rue Navez’, where one of the school buildings gives a new identity to a ‘gap’ in the existing built front.

The entries of the site distinguish themselves neatly of the surrounding built environment. Accentuated by vivid colours, they give a first glimpse of the playful world of the school lying behind. Indeed, at the interior of the building block, the schools’ facades are resolutely dynamic and marked by a large variety of materials, textures and fresh colours, offering a pleasant and ludic environment for the children. At the same time, they each respond to their very particular orientation and relation with the exterior space. Vertical solar panels offer sun protection and intimacy and large windows bring natural light to the classrooms, with their colourful and detailed execution contributing at the same time to the aesthetics and playful character of the buildings. All buildings are equipped with green roofs. All the buildings, with exception of the renovated residences, respond to the criteria of passive energetic performance. The construction works will start in the beginning of 2016.