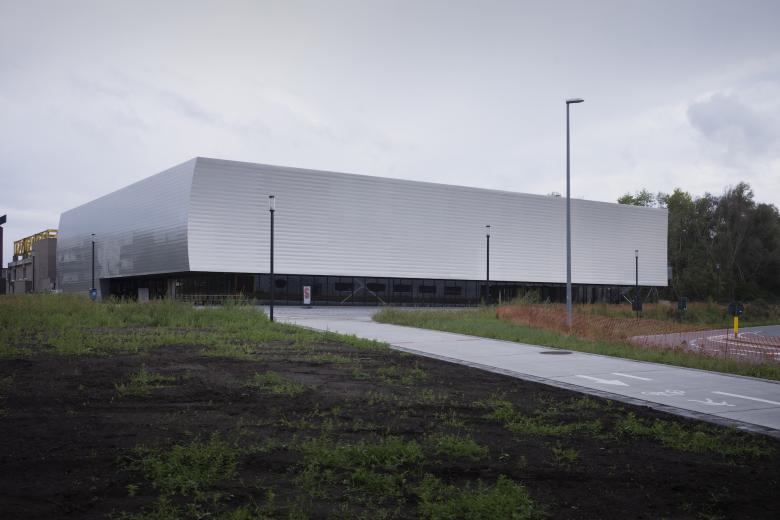 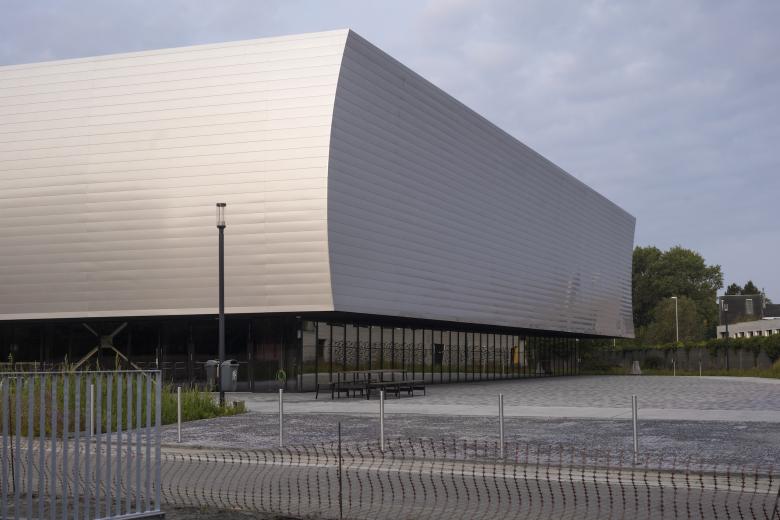 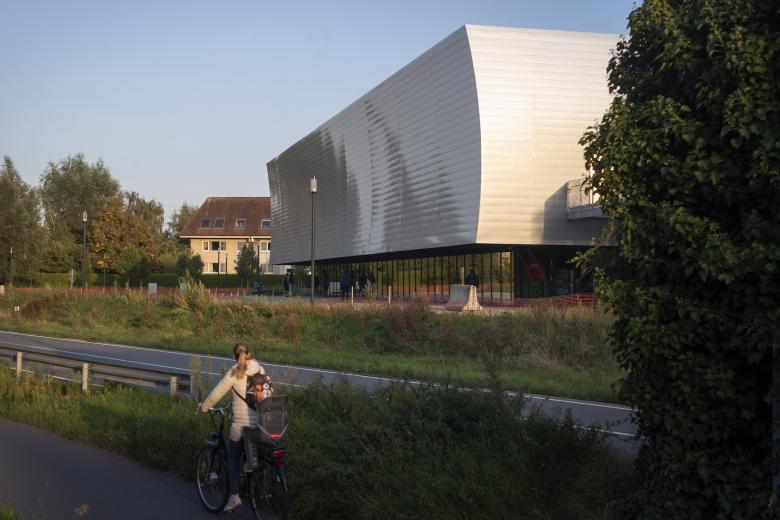 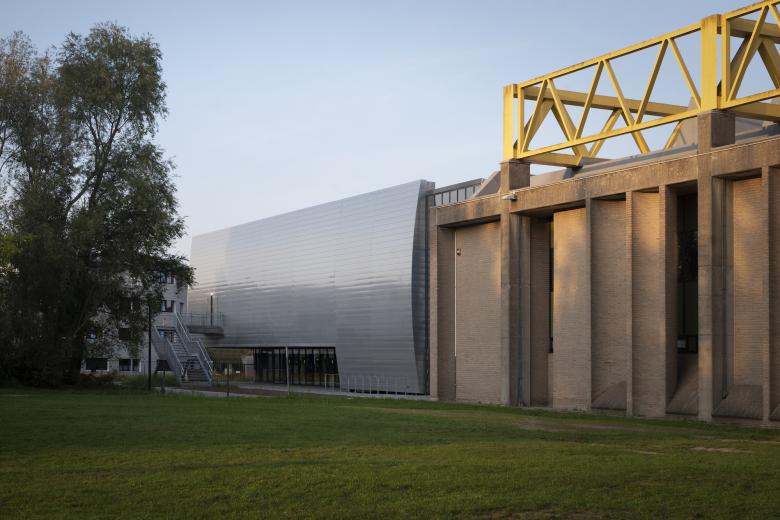 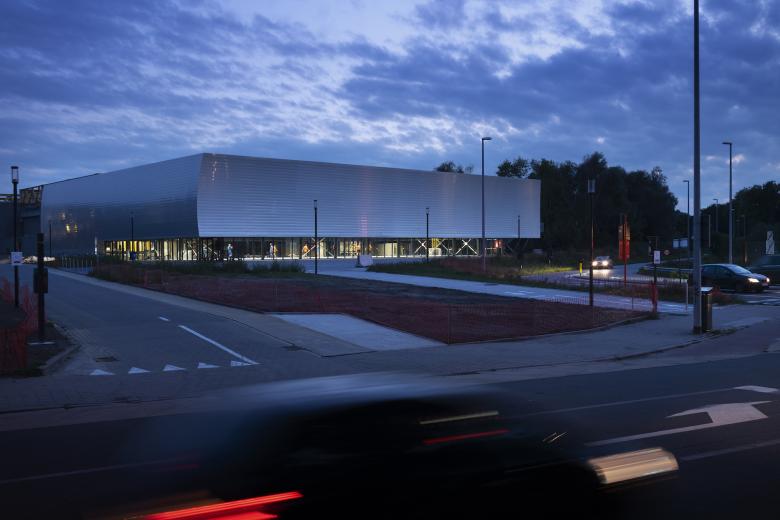 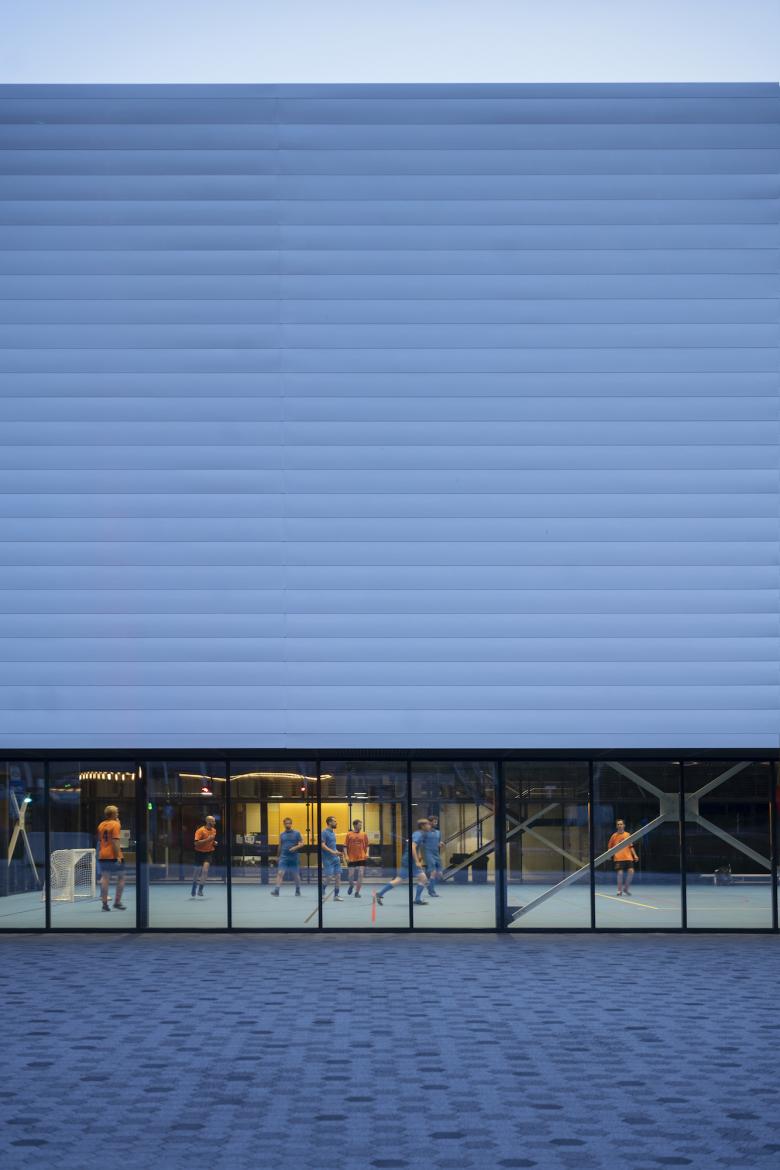 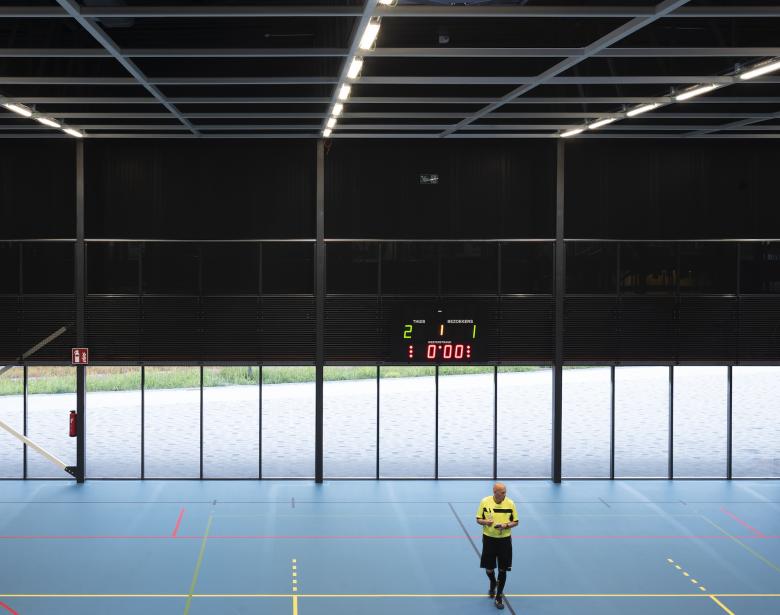 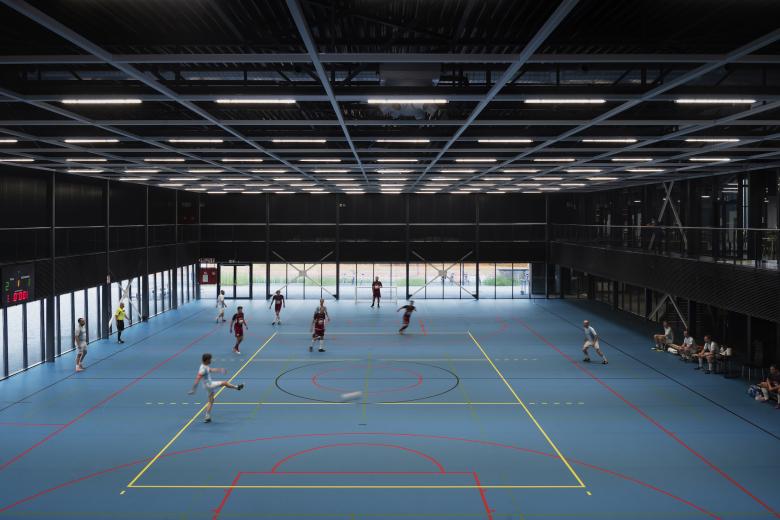 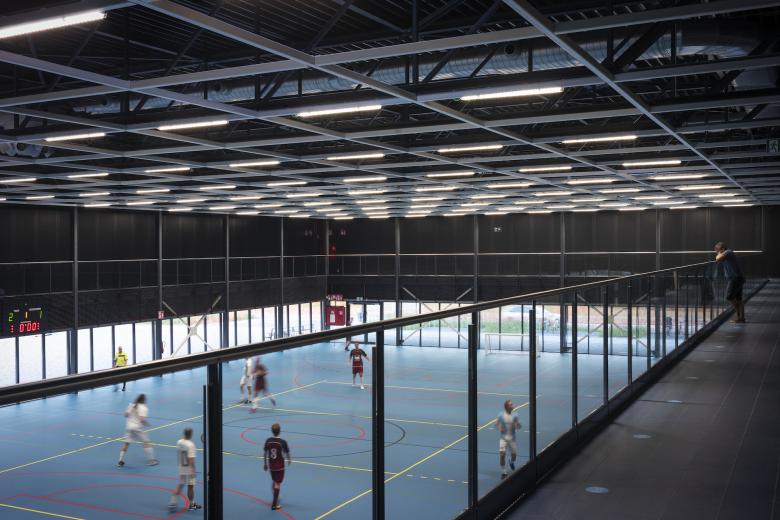 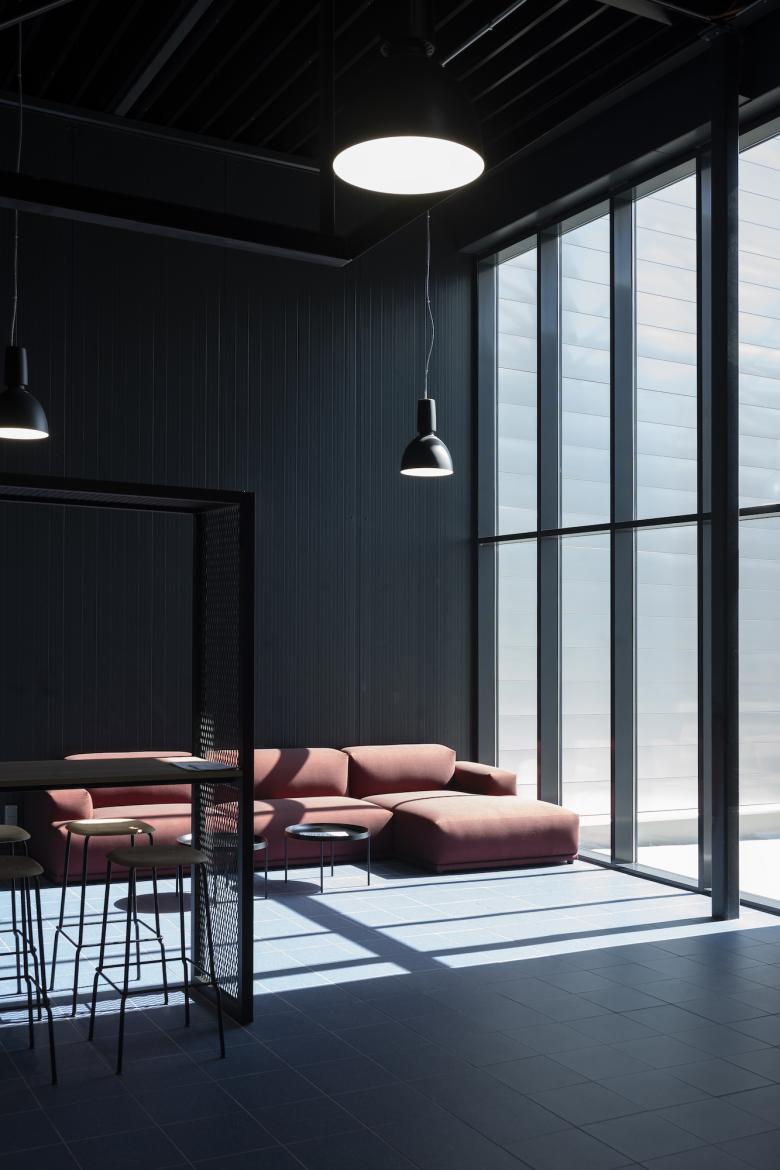 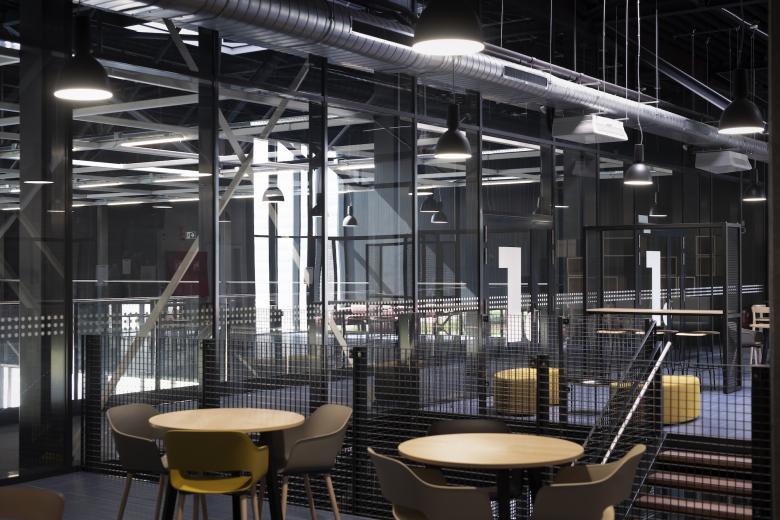 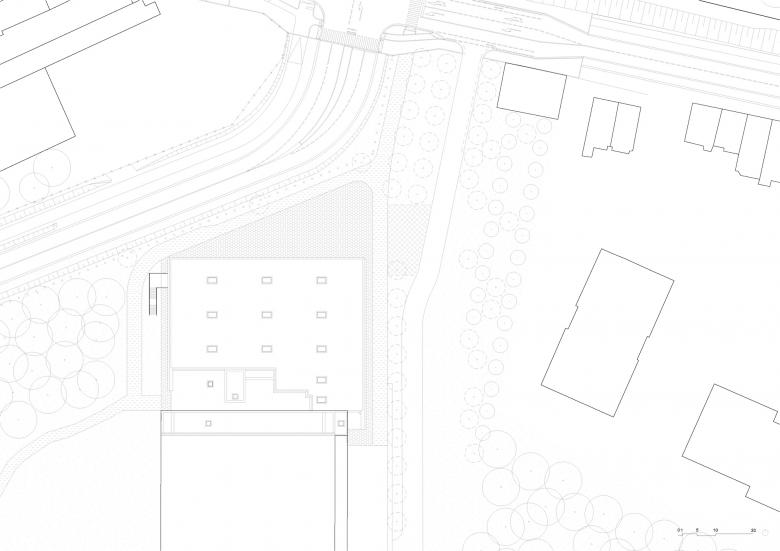 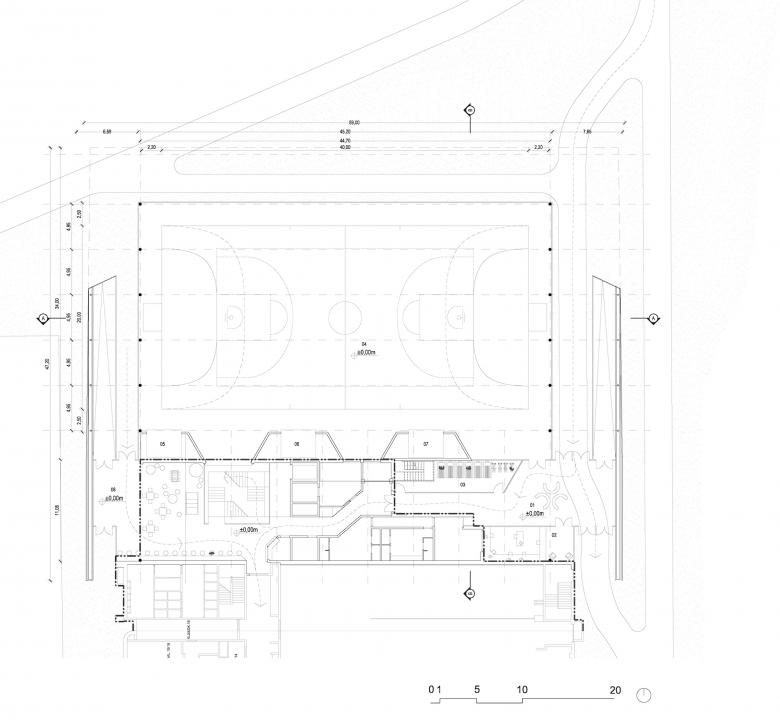 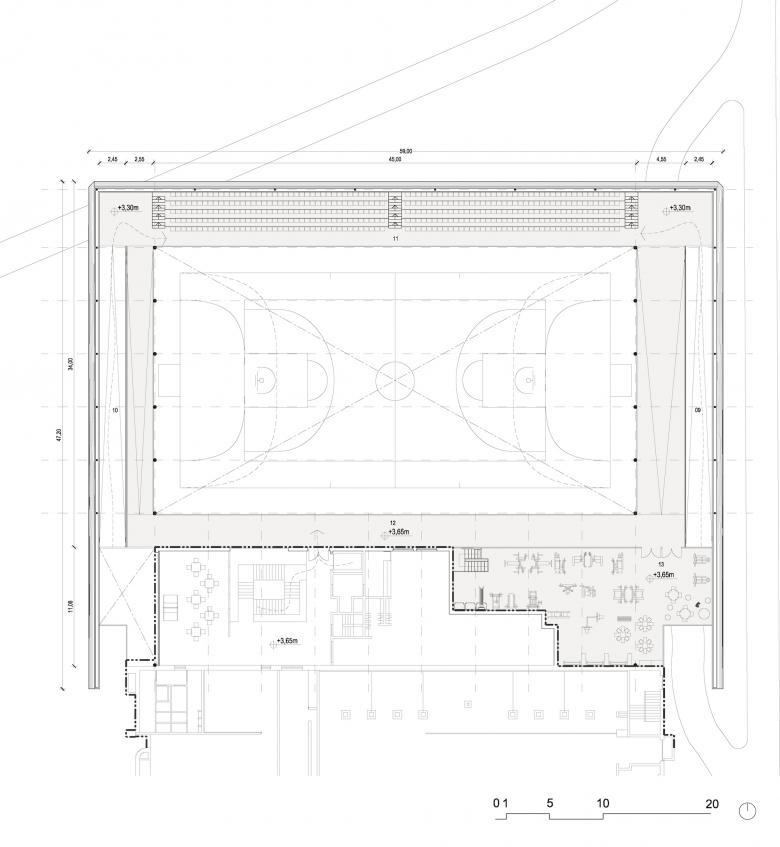 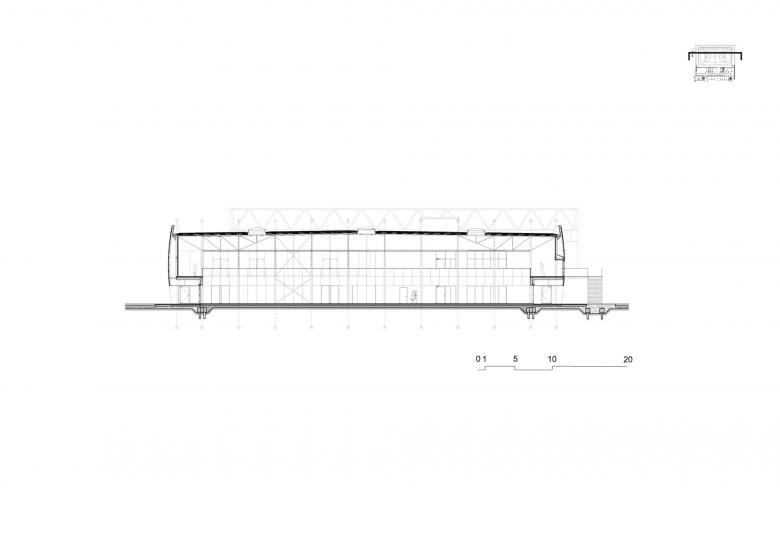 The new sports hall becomes a northern gate to the campus. Its monolithic volume is on the northern side lifted up, opening its interior sports ground to a viewing from the surrounding. Namely, an englazed stripe under the cantilevered volume unveils activities indoor to a passer-by, drivers and visitors of the campus. A careful dimensioning of the stripe as well as its connecting to a campus pedestrian route triggers a curiosity of by-passers and attracts them to enter the building. Once inside, a ramp, an access to stands in the cantilevered level, becomes a deviation of the campus pedestrian route, creating a public promenade through the building.
A visual connection between outside and inside which happens on the sports ground is interrupted by positioning a stands level in the cantilevered part of the volume: here the main focus of spectators is a sport or entertaining event on the sports ground and there should be no visual obstacles.
The new sports hall takes advantage of the existing structure: what is there already should be reused and adapted with minimum interventions. Therefore the core space at the end of the existing building gets extended and adapted to house new administration, the gym and the meeting and social areas. It becomes a mediator between the new and the existing sports hall. Its exterior facade becomes the interior wall of the new sports hall.
The monolithic volume of the new sports hall is fairly simple, compact, non-structured and almost abstract.
The wrap of the volume is non-neutral. Its semi reflective concave/convex surface mediates the happenings in its immediate surroundings into the building, creating a context’s blurred and twisted appearance and emphasizing its dynamics. Movement of trains, people passing by or athletes on running tracks reflected in the building surface, together with a projection of the interior sports events create an ever-changing appearance of the building. Thus, the monolithic volume of the new sports hall becomes a presentation device of a sports atmosphere of the campus.

Chamber of Commerce and Industry of Slovenia

Central Part of the National Gallery