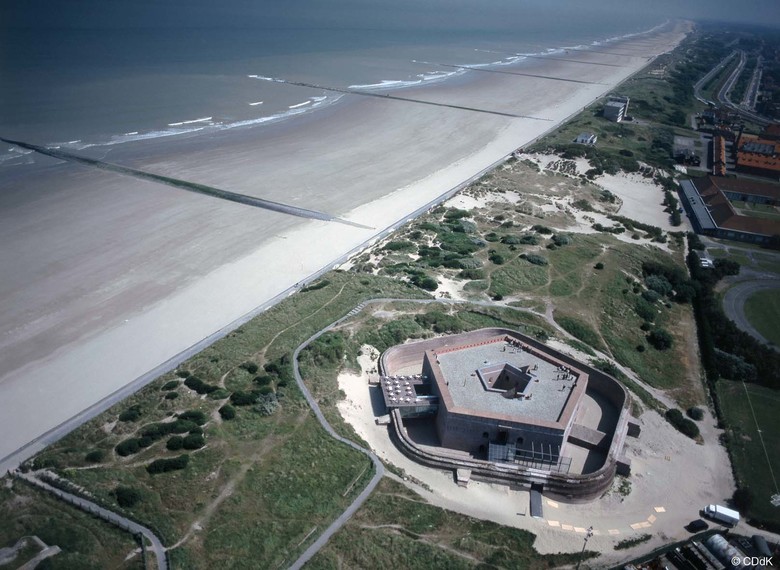 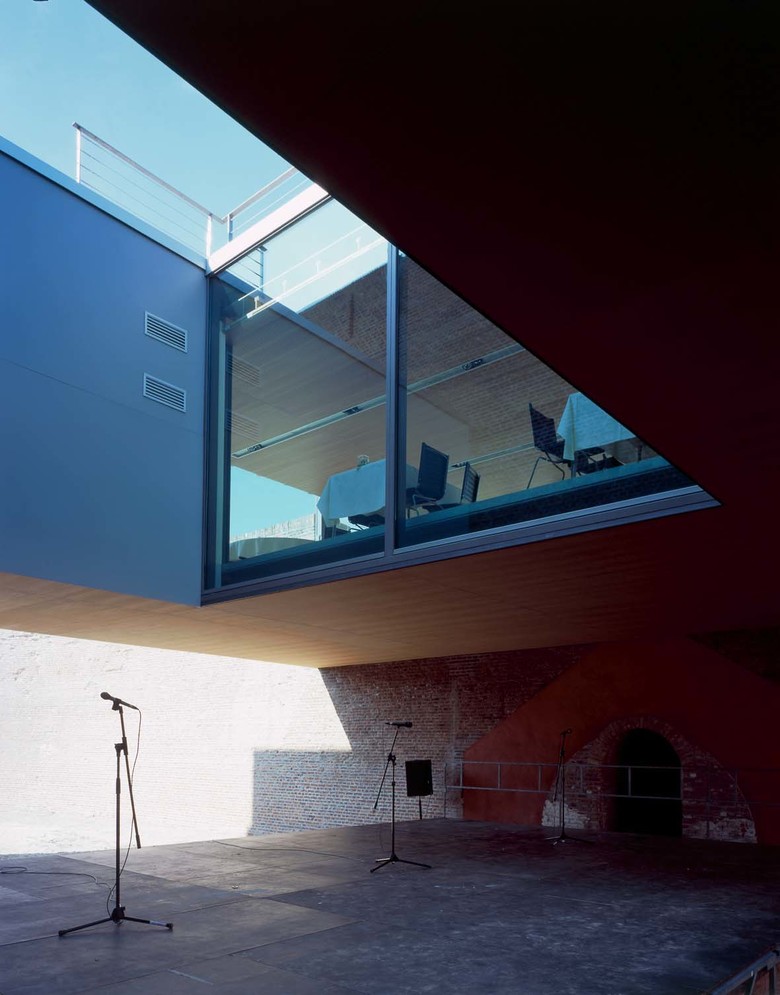 Ordered by Napoleon I, the fort once stood alone in the immensity of the sand dunes to provide more effective defense against British attacks. Built in 1814 after the fall of the empire, the building never performed its original function. Now renovated, the imperial fort is devoted to culture.

The architecture of the fort is mathematical as well as functional. The pentagon layout results in a pragmatic and poetic whole. This was initially exacerbated by the urban surroundings of the fort in the dunes, called the glacis.

Sequential approach and spatial continuity – Through a recess in the solid rampart walls a metal plane is reached via a walking slope plate near the entrance door. A glass wall is positioned orthogonally to the horizontal metal. It integrates mathematically according to the rhythm of the shooting holes, the position of the capponière and suppressed abutment.

The first floor acts as an exhibition space, bar, restaurant and seminar. The structural space is restored. Visually the continuity of the vaults are uninterrupted by the use of pivoting steel planes resulting in an open gallery walkthrough. The window openings are sealed with glass panels.

Multipurpose room (capacity 80 persons) – In order to preserve the spatial continuity on the first floor, a transparent volume with patio breaks out of the circuit pattern. The volume stretches over a cut capponiere and connects with the tower. The roof was conceived as a terrace, facing the sea, dunes and port. The volume is constructed out of metal and glass. The horizontal surfaces are finished with wood on both sides. This intervention provides a counterpoint to the solidity of the fort and contrasts with the centralized layout of the fort itself. From the introverted walls and arches, one arrives here in an open eccentric space. It symbolizes openness to future social developments and initiatives. Geometrically it is the reflection of the opposite interior side of the fort as with the forts side as the axis of symmetry.

No interventions were made on the roof and in the inner courtyard, given the strong amenity of both places. The roof reveals a view over the dune landscape and gives an impression of the old defense site and its remnants. The directionless pentagon inner layout is a strong architectural aspect, given the military function.

The more closed ground floor was left intact. In some capponieres historical information on forts construction is given. The ground floor window openings are protected with stretched metal, giving acces to a dry moat.