New Building of the Faculty of Social Work (Building T) 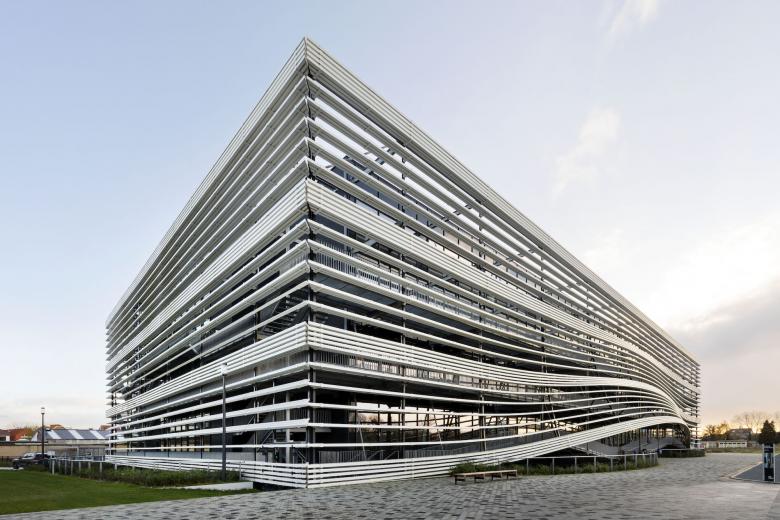 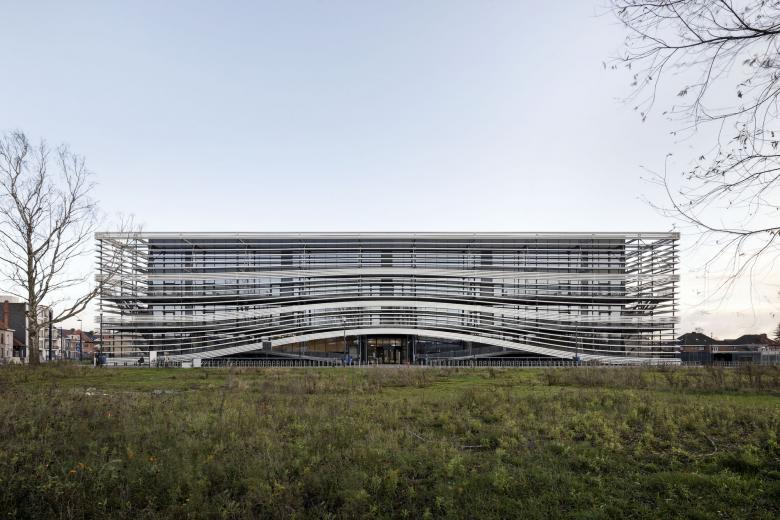 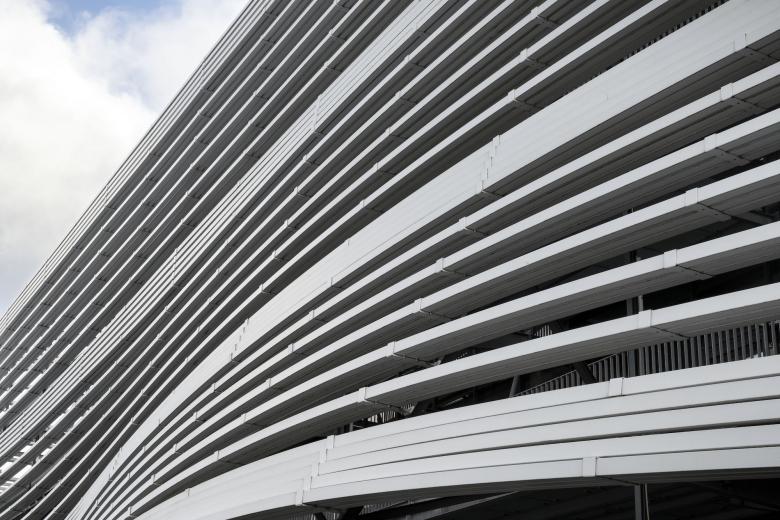 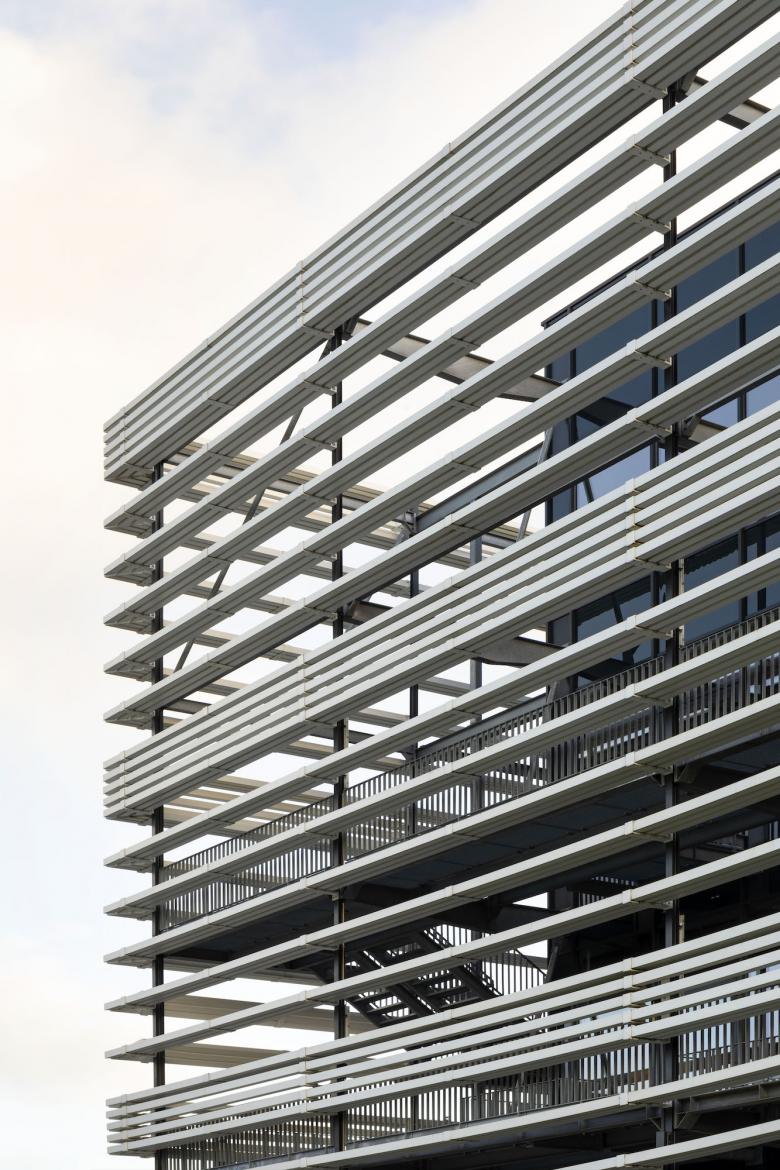 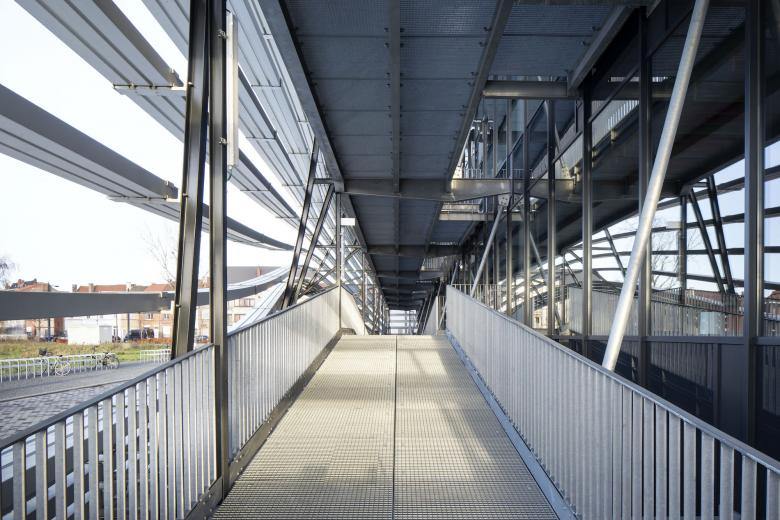 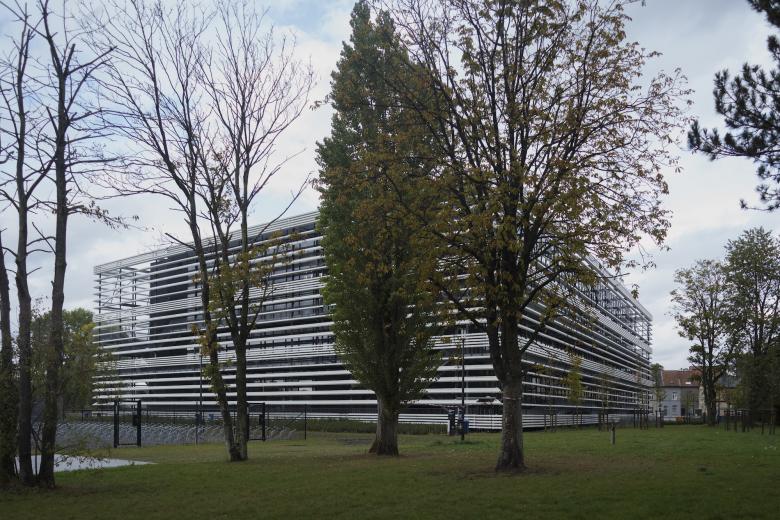 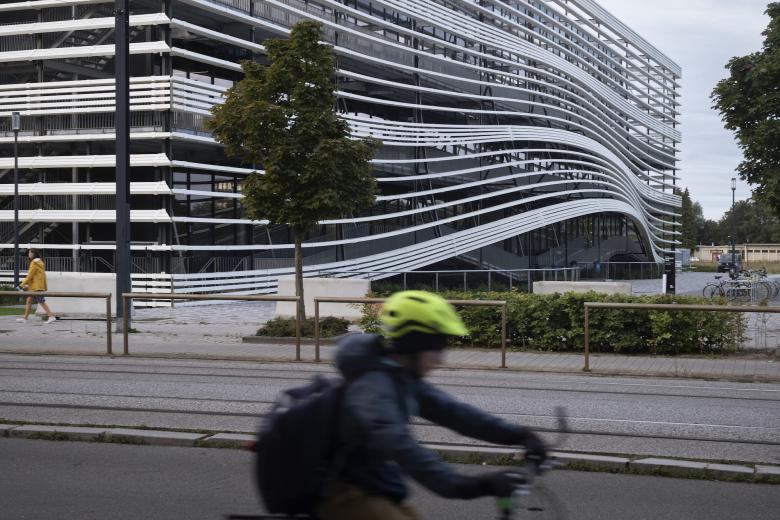 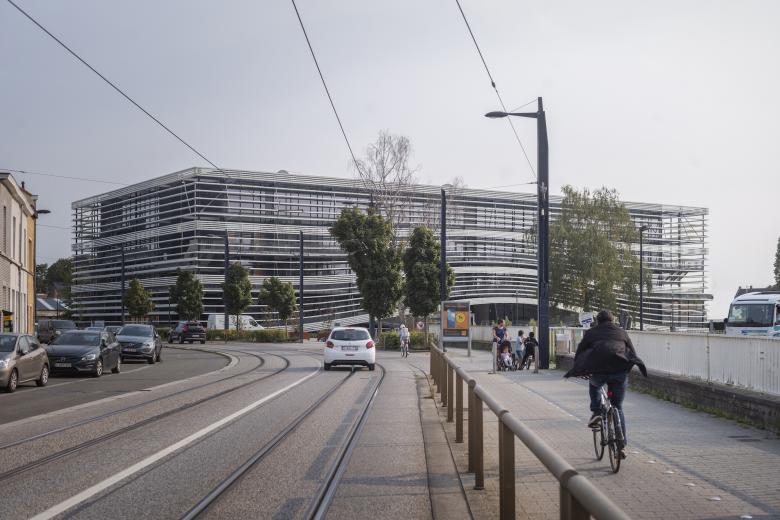 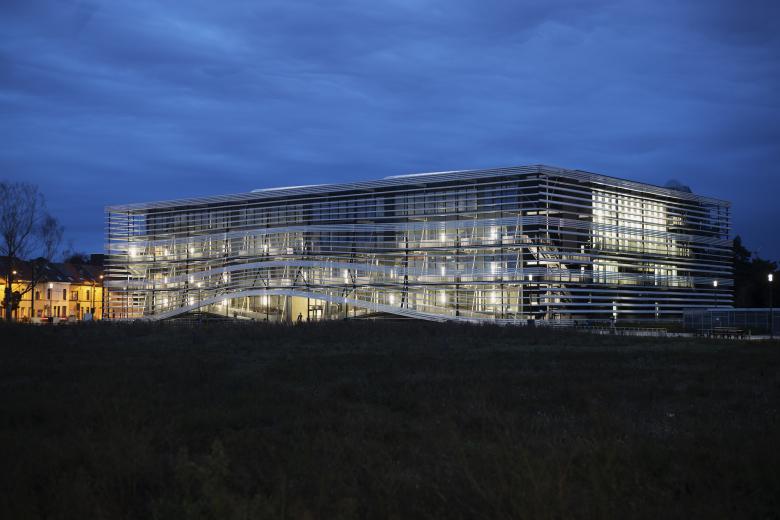 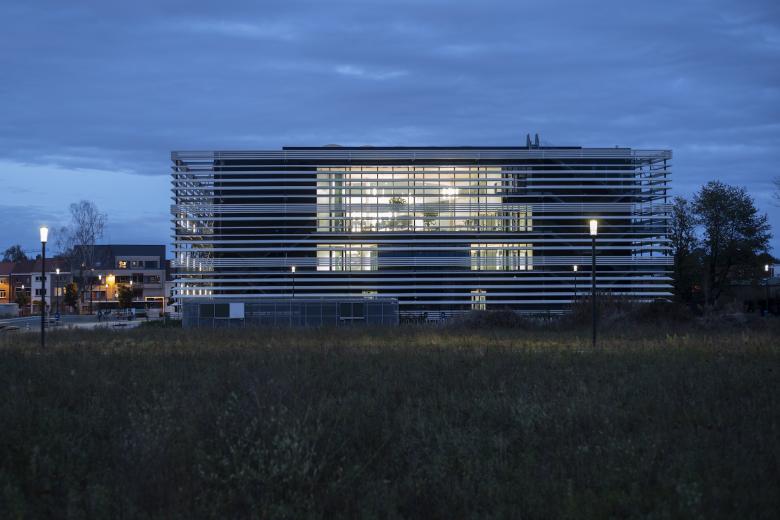 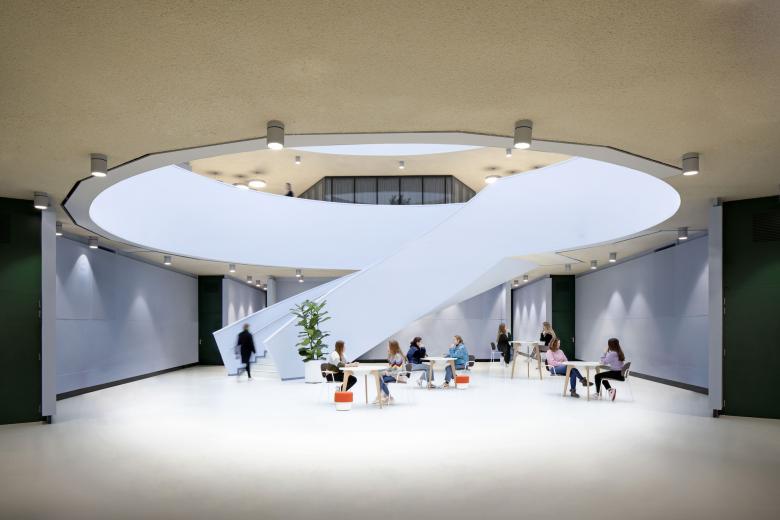 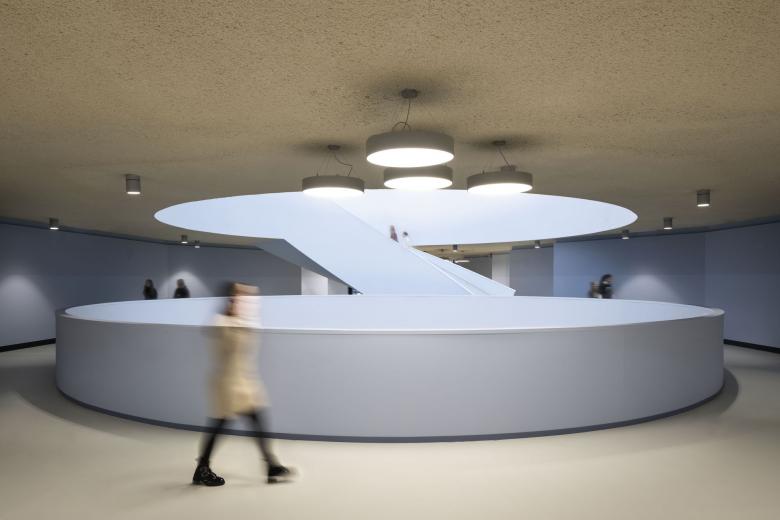 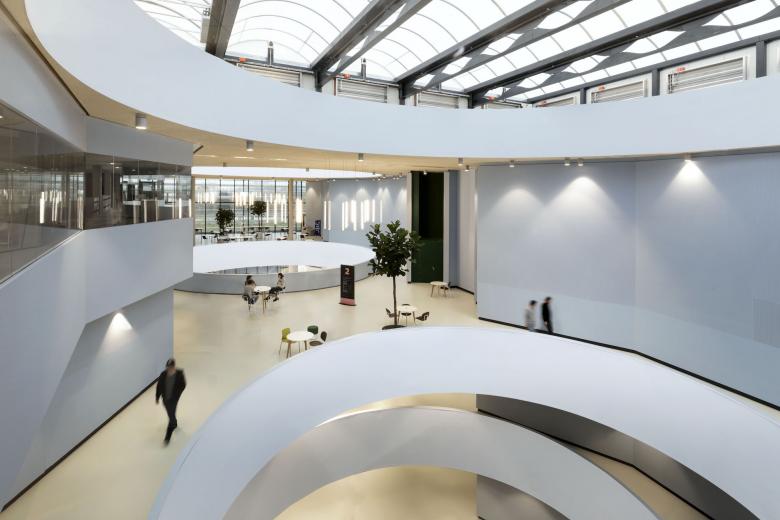 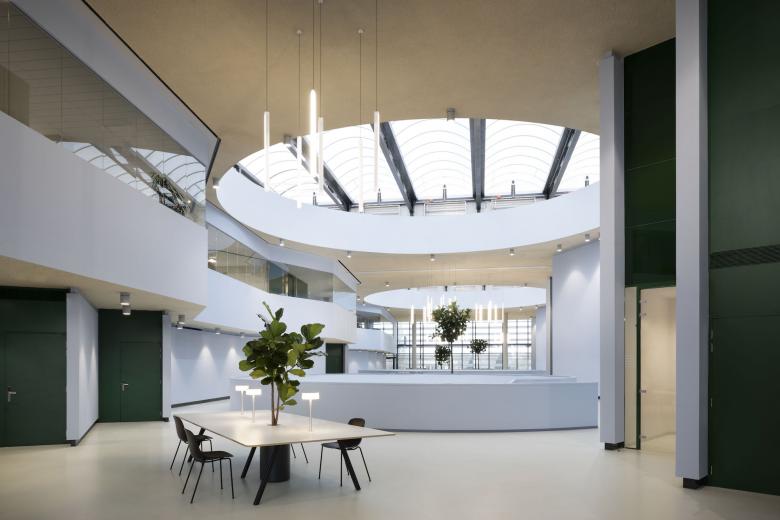 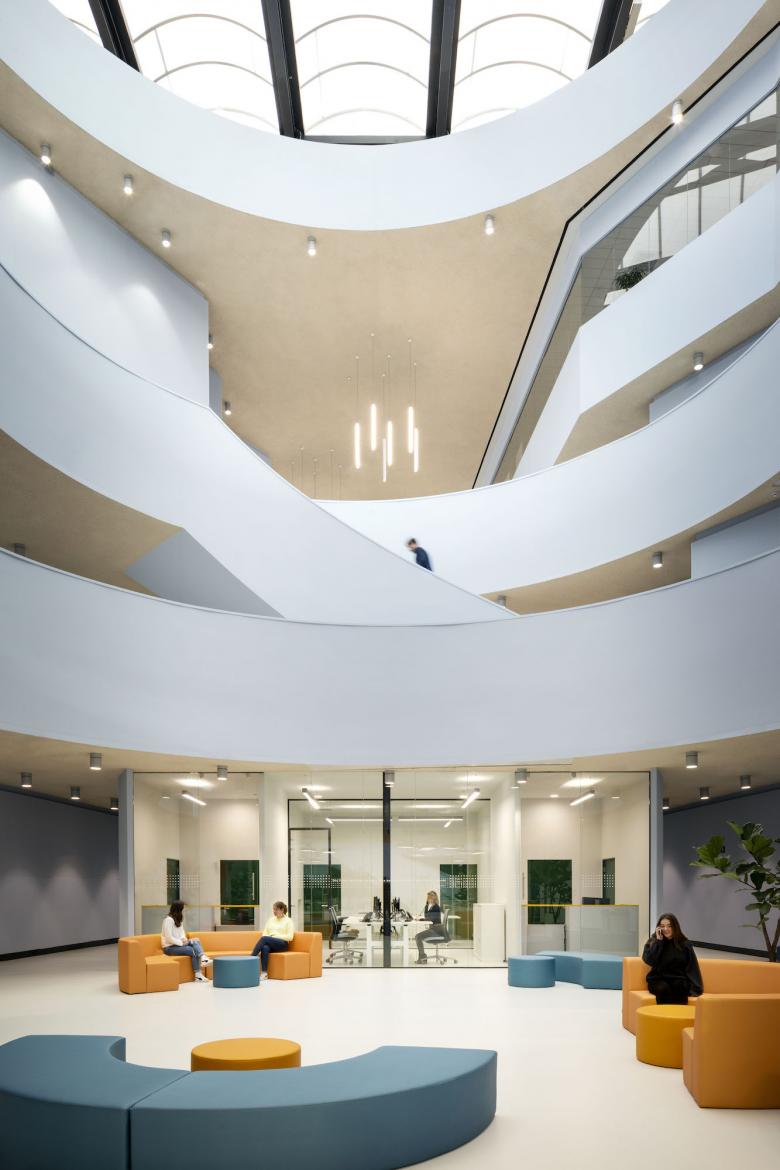 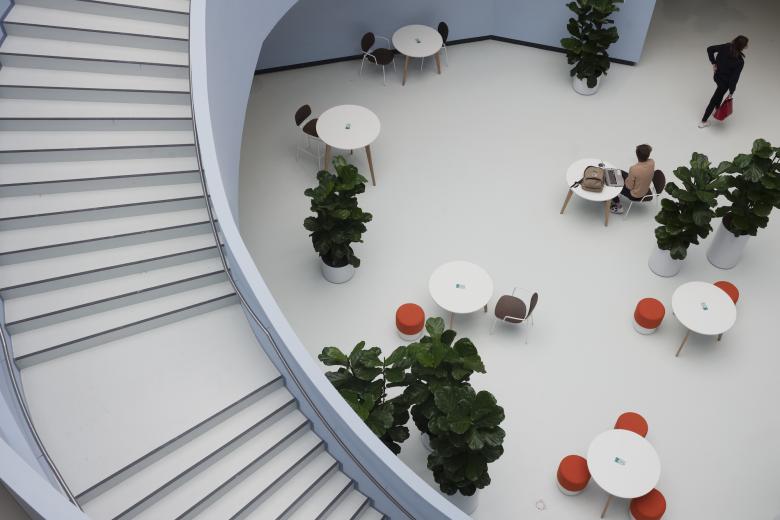 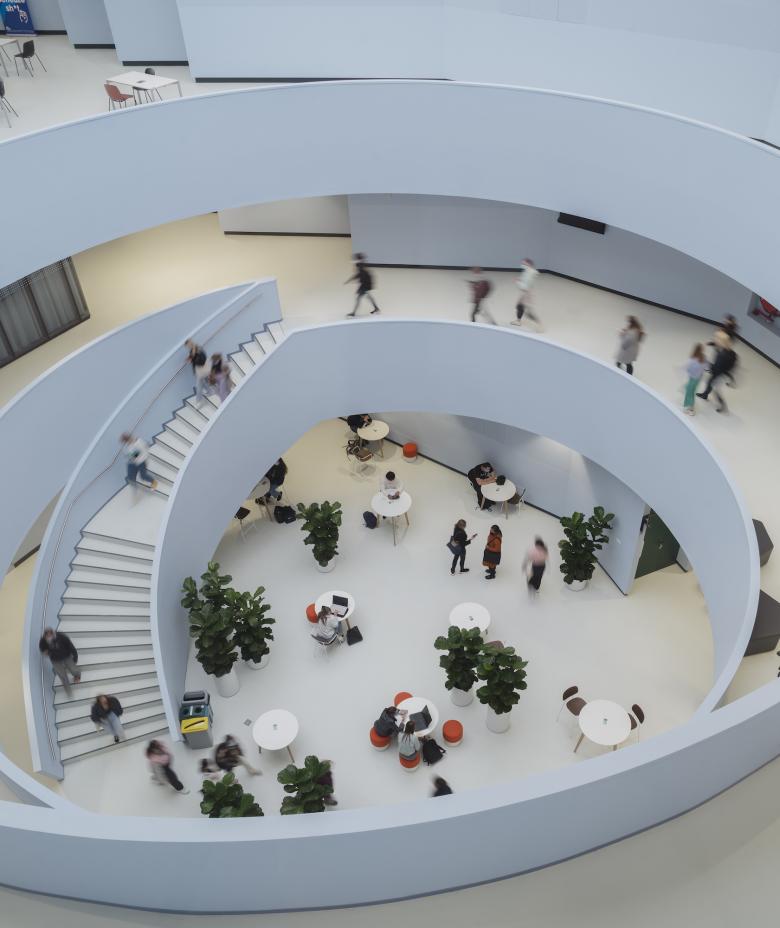 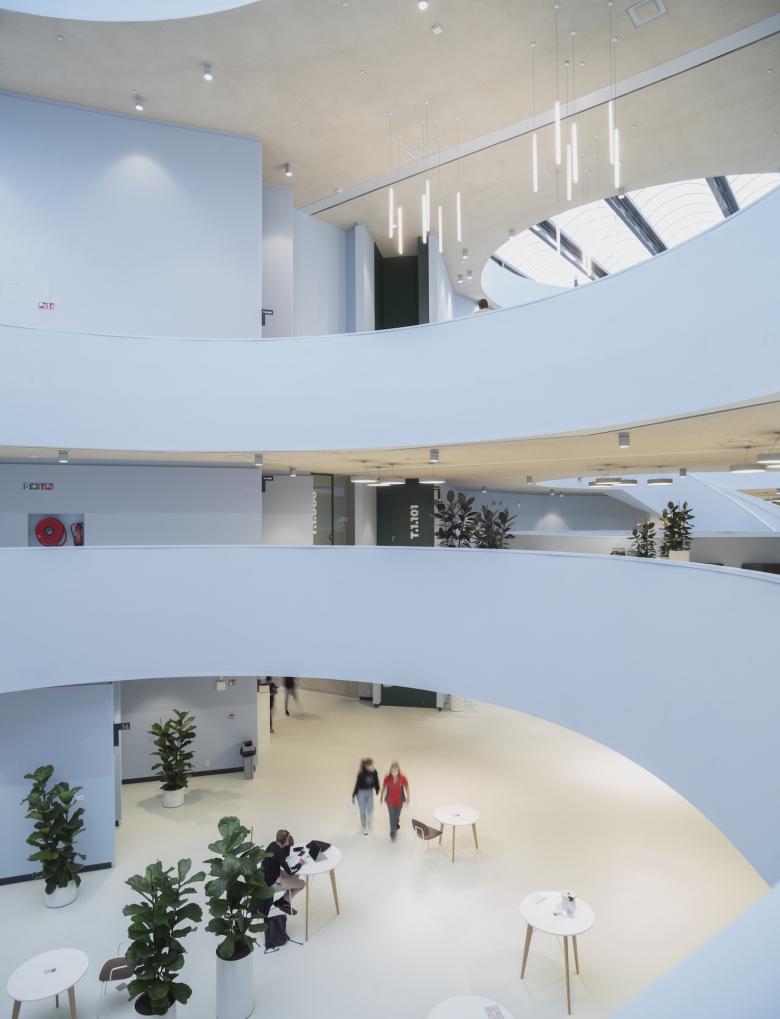 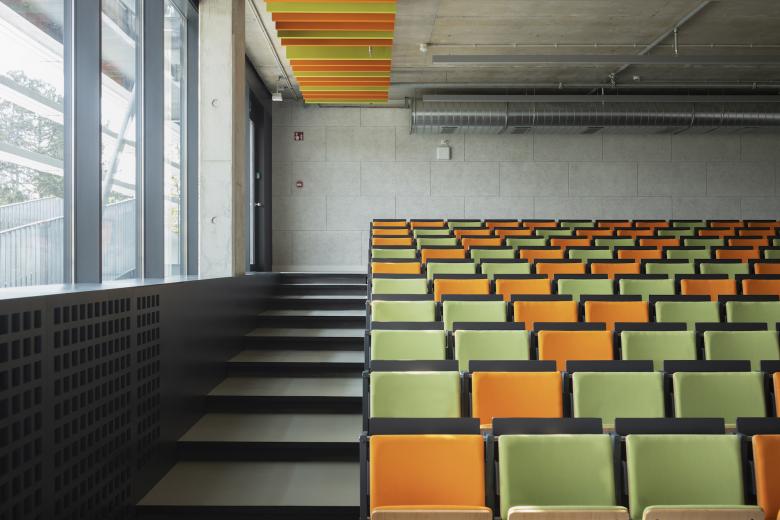 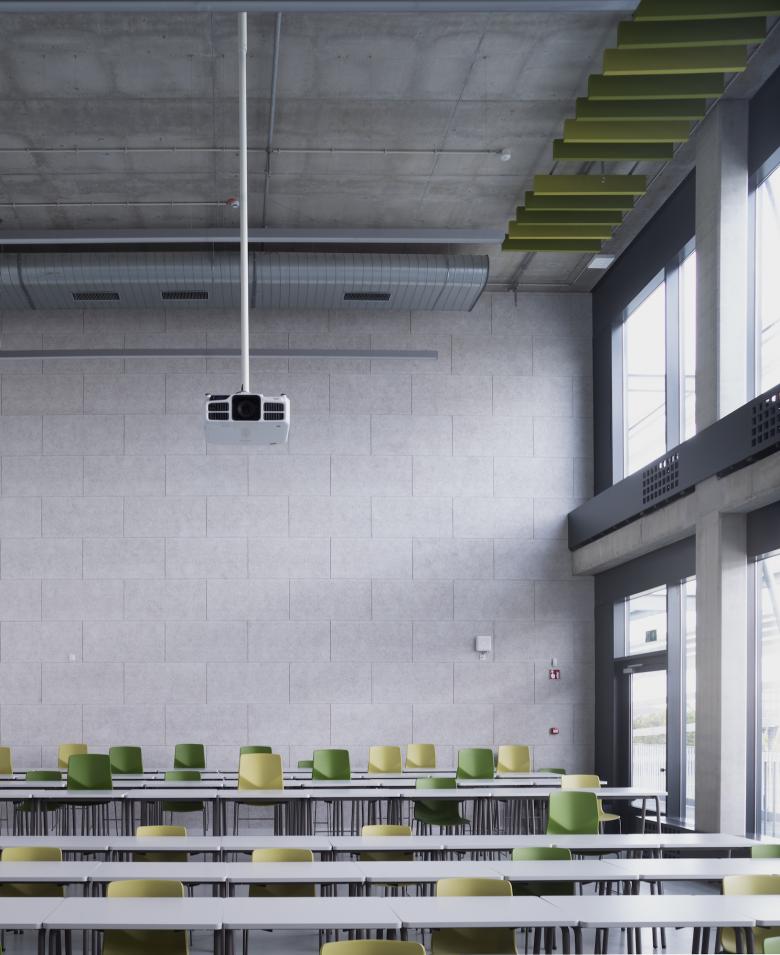 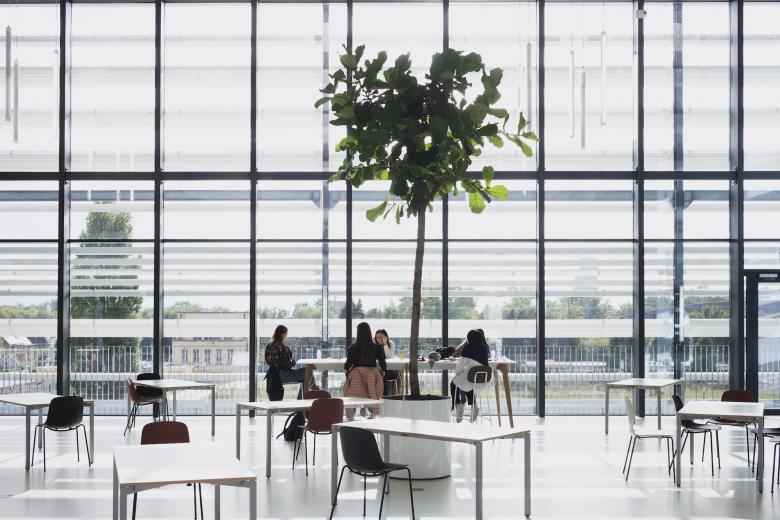 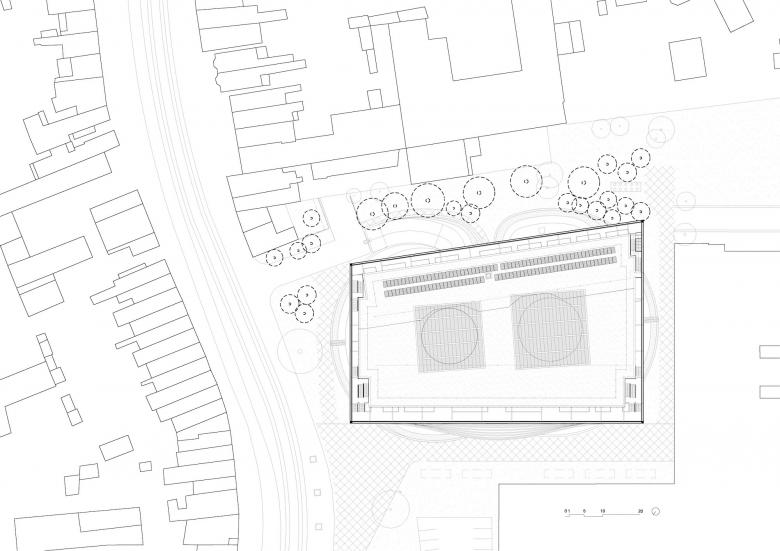 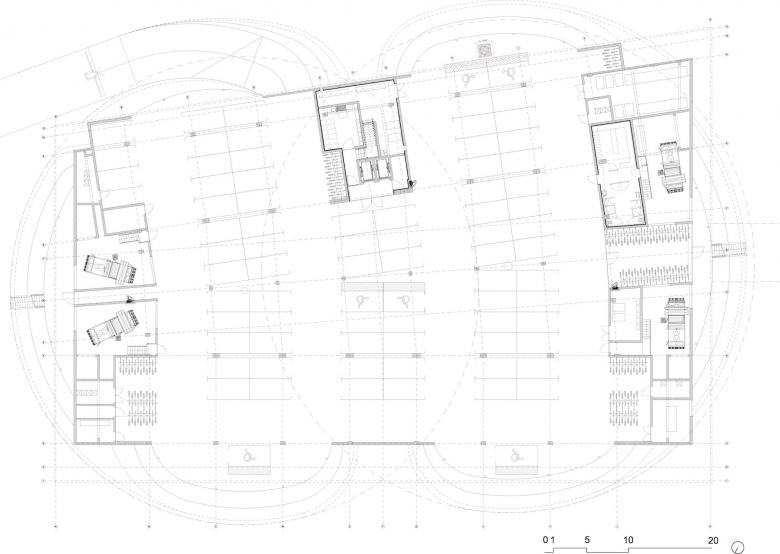 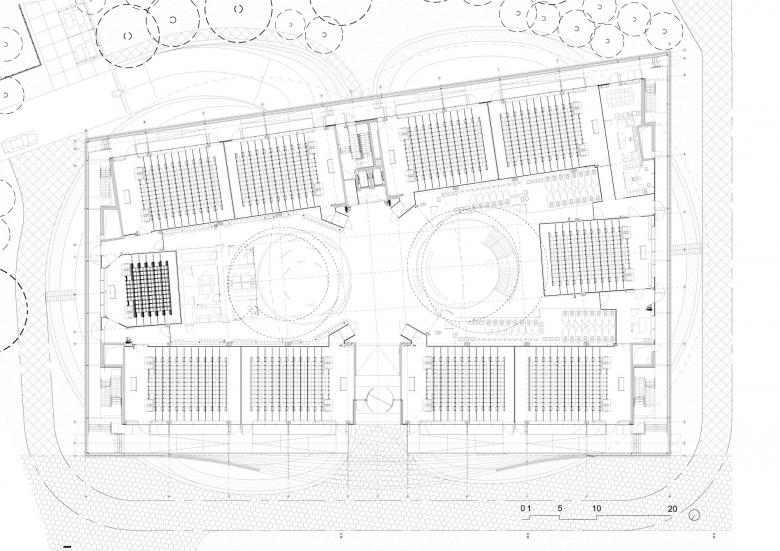 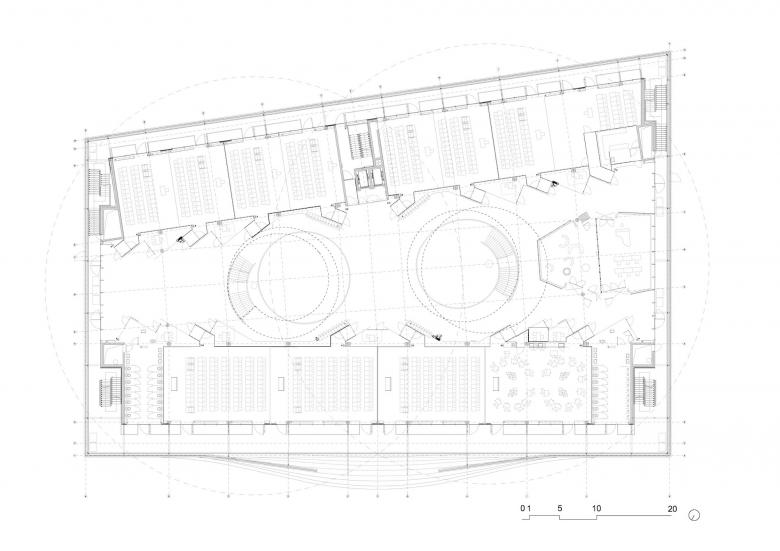 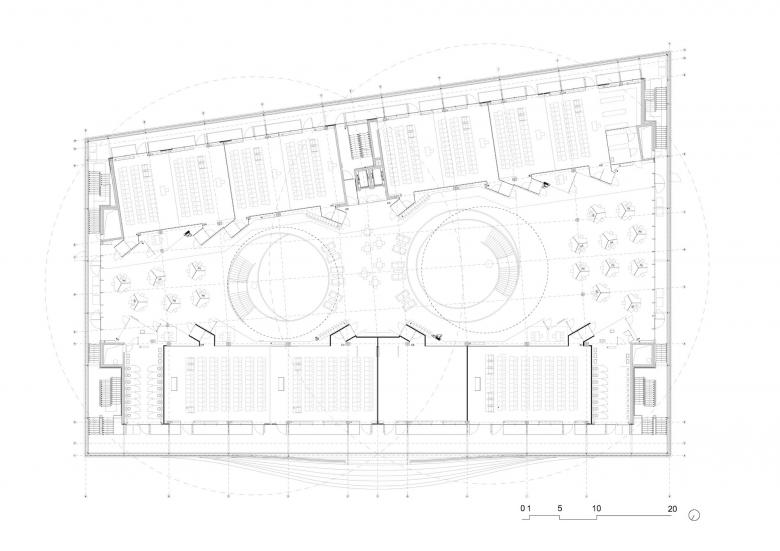 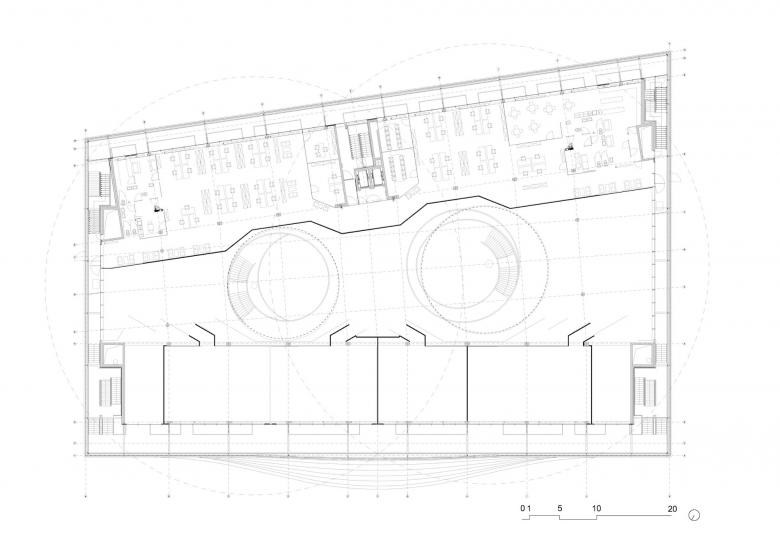 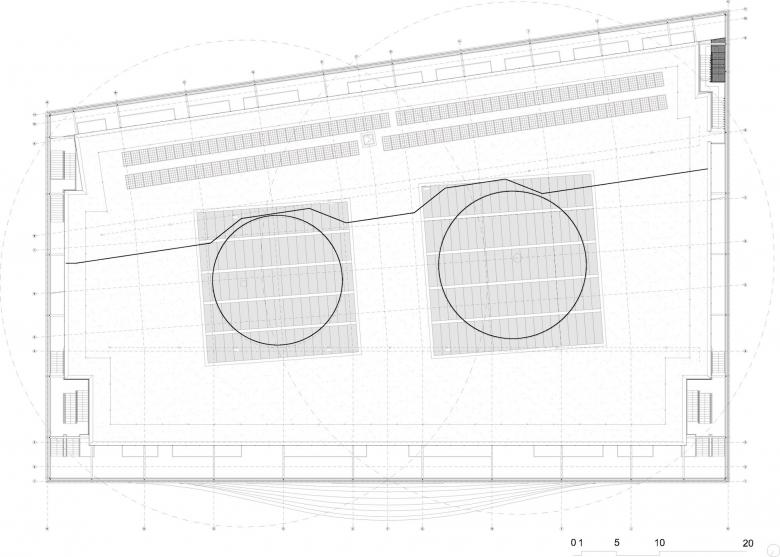 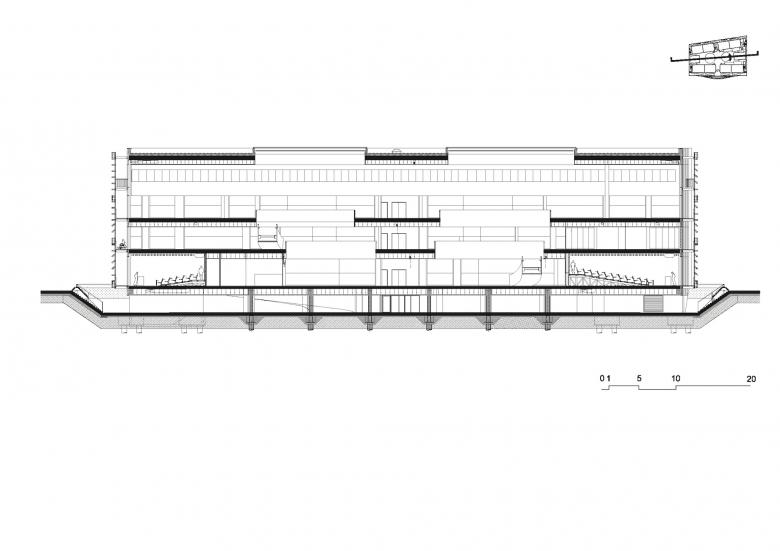 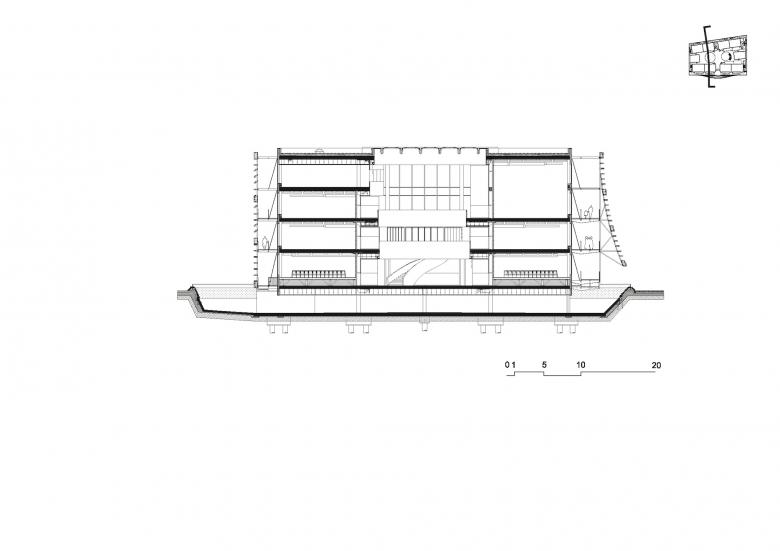 The new Building for the Faculty of Social Work (Building T) and the Sports Hall Extension at Kampus Schoonmeersen of University HOGENT in Ghent, Belgium, were completed in September 2020. The buildings are now opened to the public with a limited access due to the corona virus.

The new Building for the Faculty of Social Work (Building T) acts as a southern gateway and the new Sports Hall Extension forms the northern gate to the campus.
Building T is a free-standing volume, set back off the Voskenslaan, creating an open space as a transition between residential homes along the street and the large green axis of the future masterplan development. Its monolithic massing communicates with its immediate surroundings with a permeable shading membrane, horizontal lamellas which evenly wrap the building’s englazed volume. The wrap opens up at the north-west side of the building in front of the plaza as a big entrance arch, unveiling the interior of the building on the ground floor. The big entrance arch acts as an inviting element that directs people from the plaza/lawn outside to the interior of the building.

Building T is developed as a new school environment, as a hybrid studyscape, where students, teachers, visitors, and the general public meet, interact, study, work, and play. Long corridors are avoided in the building, as well as the separation between vertical and horizontal circulation. Two big round atriums provide a visual connection between the floors, vertical and horizontal circulation on the edges of the atrium provides a smooth transition between the floors.

The central stripe with the two atriums becomes a new type of school space. It is developed on four levels, from the entrance level to the inhabited roof. This is a space for meetings, gatherings, informal events, performances, and spectating, as well as for study and work. It becomes a sort of interior semi-public space, a vertical hall, where activities on each floor are evenly stimulated by visual connection through the atrium space. On each level, there are entrances to classrooms on both side stripes, leading from the central stripe.

The porous monolithic volume acts visually as a recognizable mark of future campus development. Namely, the most open, socially interactive central stripe of the building stretches all way to the glass façade and shading lamellas, creating a visual connection between the street space and the activity in the interior, whereas more standard organized classrooms of the NW and SE stripe are visually detached from the lamellas by evacuation corridors. Thus, the building has different visual depths: the entrance arch is the deepest, the street and campus side are the shallowest. The new Faculty of Social Work building gets a character of a public building, where activities of the school are not only presented to the campus but also to the general public and inhabitants of Ghent. This public environment would not happen only on the ground floor: the public path – the promenade stretches through all levels, passing by an exhibition area, working desks, study chambers, and a cafeteria. The promenade acts as a presentation route of the life of the school.

The social, visual, and spatial permeability of the building is supported by its environmental / atmospheric character of the building. The displaced overlay of the two atriums, as well as their roof, and lamella shaders, which provided insulation in winter and spring / autumn, and shading in summer, stimulates migration of people and activities in the building. Their tendency to find the most comfortable place along the promenade in a certain season as well as the time of the day provides a vivid and ever changing occupancy of different areas in the building. The building has a 'deep facade' which consists of three layers: the inner, thermo-insulating layer of the simple curtain wall facade, made of transparent and laminated glass units, the mid-layer, where the fire escape metal passarellas are positioned, and the outer layer, the wrap of the fiberglass composite lamellas. A careful study of the insulation and shading of the classrooms in the building was conducted in order to define the optimum angle of the lamellas.

Pultruded glass fiber reinforced polyester profiles make up the slats of the fixed lamellas around a volume with facades made from glass and aluminum. The profiles, 36m in length, were delivered at the site straight. On site, a number of profiles were bent elastically to create an inviting point of the main entrance to the building.