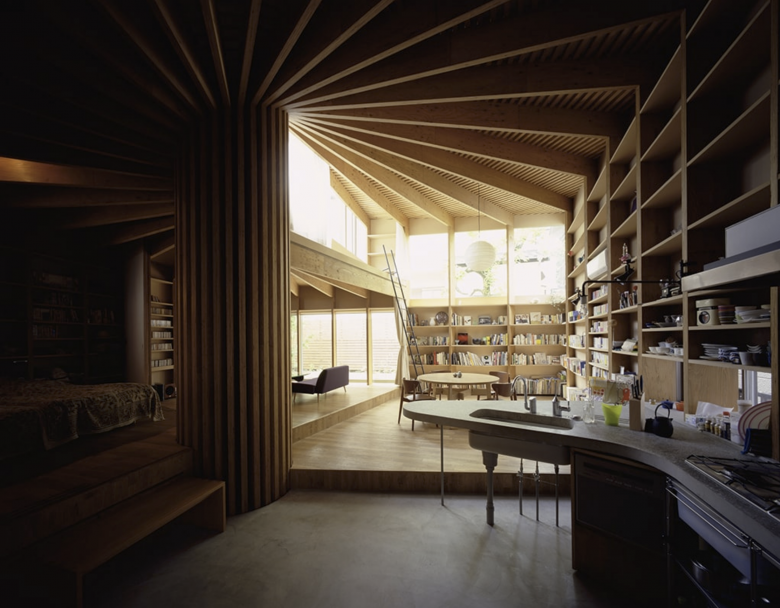 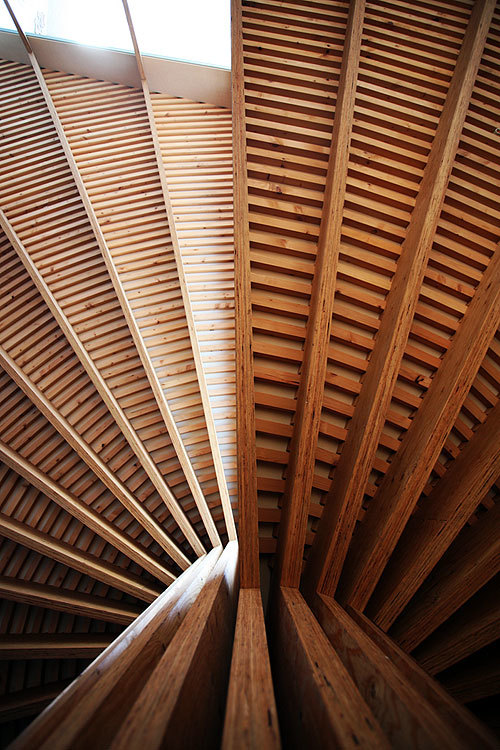 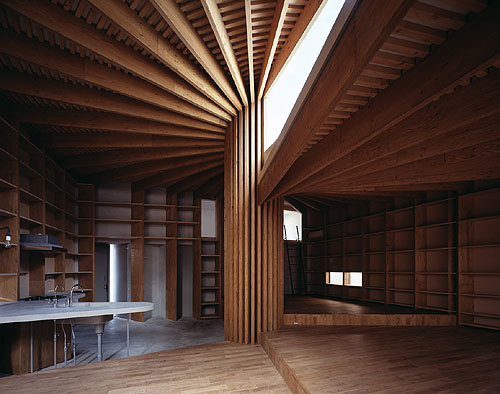 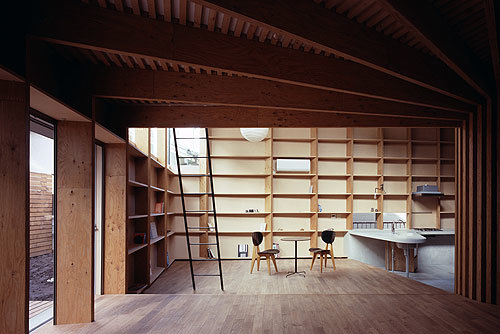 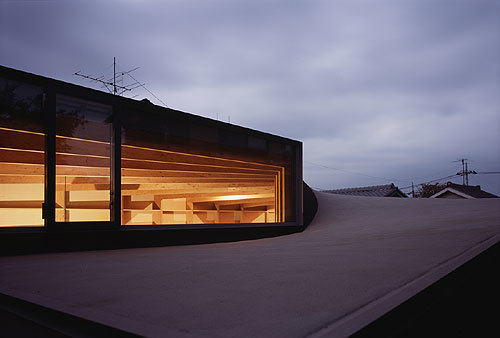 This house for a couple is built in a residential area on a gentle hill in the northern Tokyo. The site is located at the top of a hill connected with a narrow path leading to the actual building lot.

The ground level is gradually climbing higher from edge of the site. Although the site has particular sense of oppression and dusky feel, and the actual building lot is completely enclosed by the adjacent houses, we realized with the characteristic of the place as the depths of the urban condition without exposing to the outside, and secluded from the town.

In this case, it is more suitable to extend the volume vertically rather than horizontally.
Similar reason can be found in the nature that a tree enclosed by other tall trees in a deep forest tends to have vertical directivity for its growth.

The geometry achieved through “Cartesian coordinates system” is typically applied in architecture since it has advantage in terms of the repetitive expansion in a fixed orientation. However, this system is not suitable here as previously described. Rather, it is desirable to apply a geometric rule, which can pick up the subtle, close relationship and the balance between the site and its edge conditions.

Thus, we decided to utilize the “polar coordinates system” as the geometry defining this architecture, which describes the location of an element by the distance and the angle from the center of the site. (Please picture the 2-dimentional Voronoi diagram.)
In detail, the arch-shaped “column-beam” frame structure made by LVL/Laminated Veneer Lumber in 51 mm thickness is rotated in the regular angle of 11.25 degree (360 degree/32 frames) to form this architecture.

Each frame gets 55 mm higher than the previous one, therefore there is the height difference of 1.7 m in frame as they go around 360 degree. This system forms the fluent Hyperbolic Paraboloidal curve surface providing the entrance to the roof terrace, while it also functions as the high side light that brings in the only open sky toward the east and the greenery of the neighboring house as a framed picture.
At the center of the polar coordinate is condensed with 32 pieces of the LVL columns, forming a large central pillar with the diameter of about 1.1 m.

The frames rising up spirally make variations in the ceiling height, which define the characters of each four territories. For instance, the intimate shadowy territory by the denser distance of the columns and lower ceiling is defined as the sleeping space, and the bright, high-ceiling territory applicable with large window opening by the larger distance of the columns can be suitable for dining space, The floor level is also shifted as skipped floors according to the division of the territory by the central pillar, although the height difference is based on the topographic condition of the existing site.

The completed house was formed by the strict rules of the geometry, but somehow it achieved the atmosphere unlike the artificial object. When we sit down at the bottom of the central pillar and lean against to look up, those radially extending beams appear to be the branches of a large tree.

Surrounding of the central pillar stem provides the “place of inhabiting” for the life peacefully. Here, there is a different quality of the place, unlike the transparent “space” to be called as a “house”. This make us realize that the center of a “space” may reflect on a social “meaning”, while the center of a “place” would consist of the sense of “existence”.