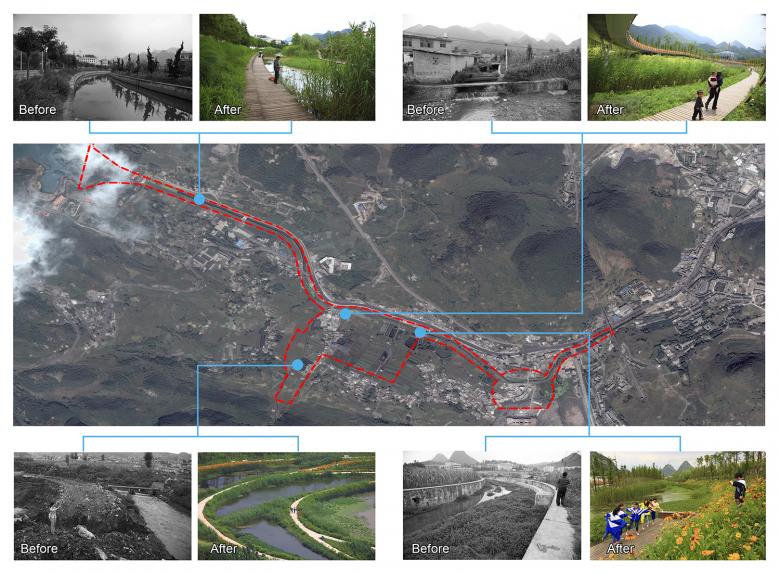 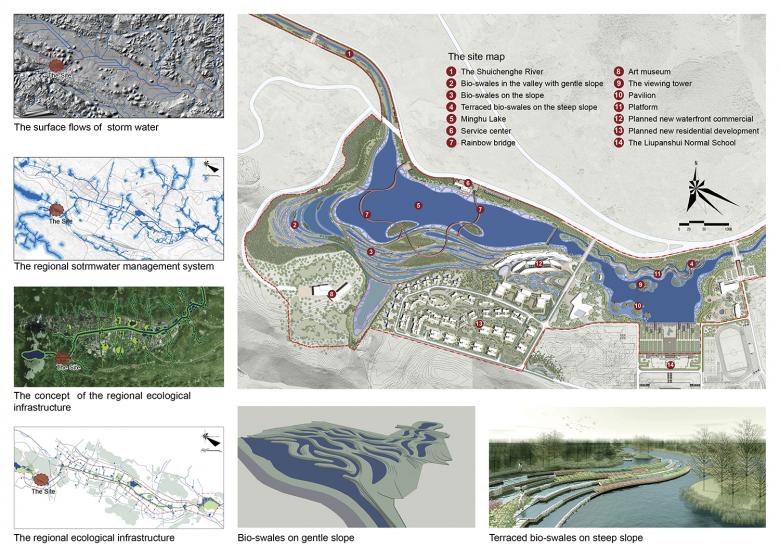 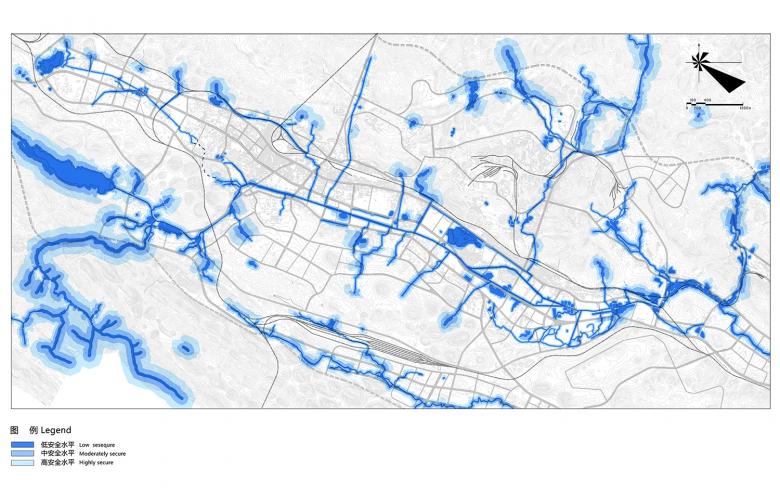 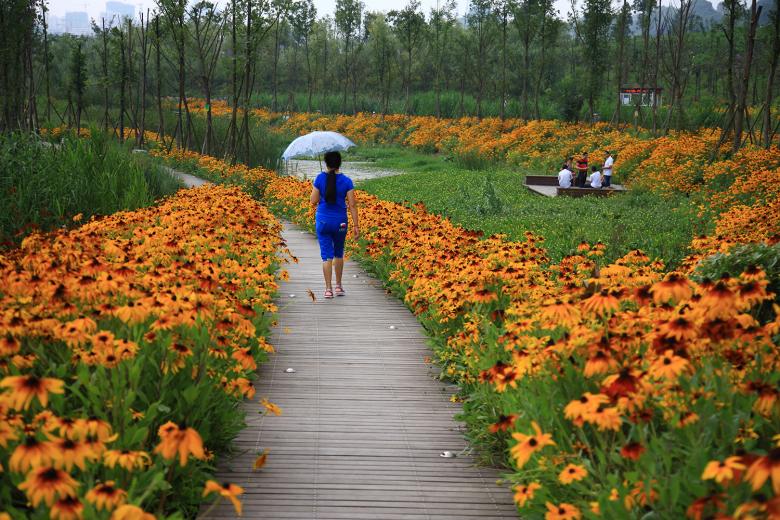 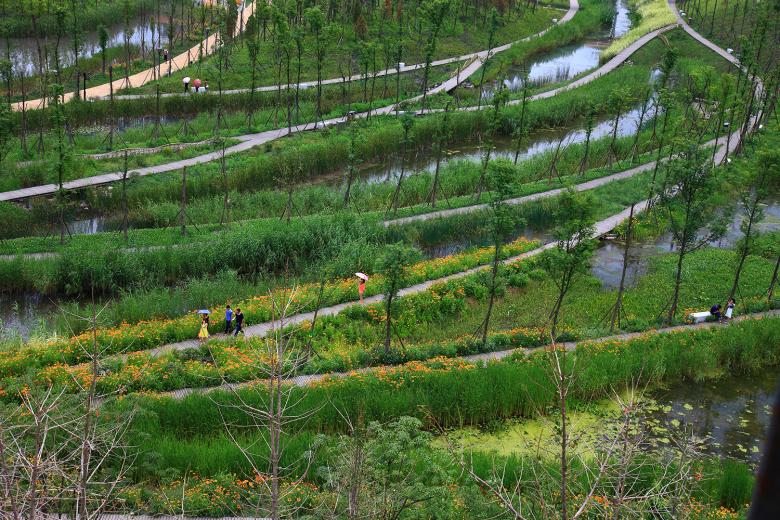 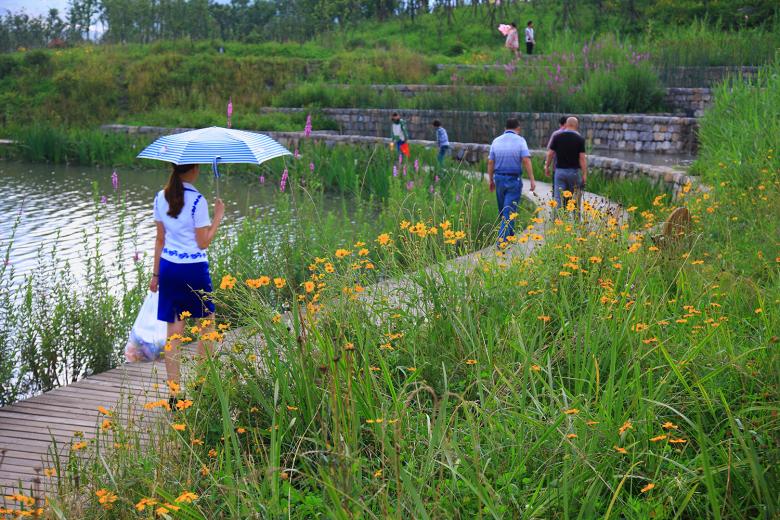 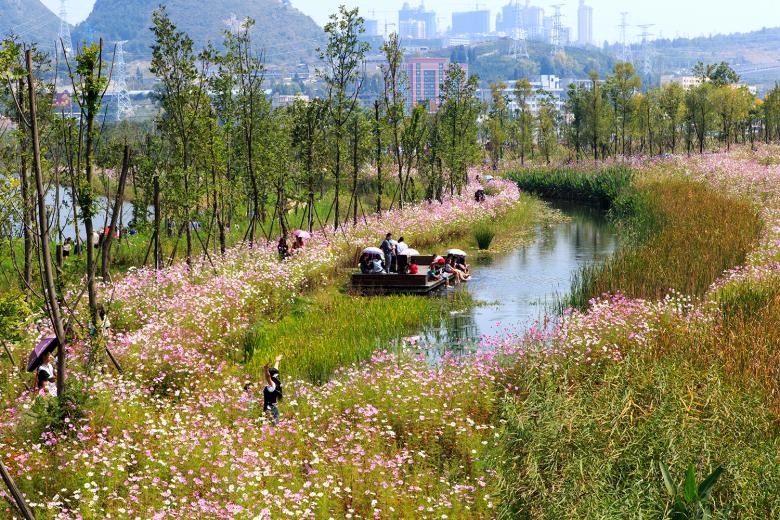 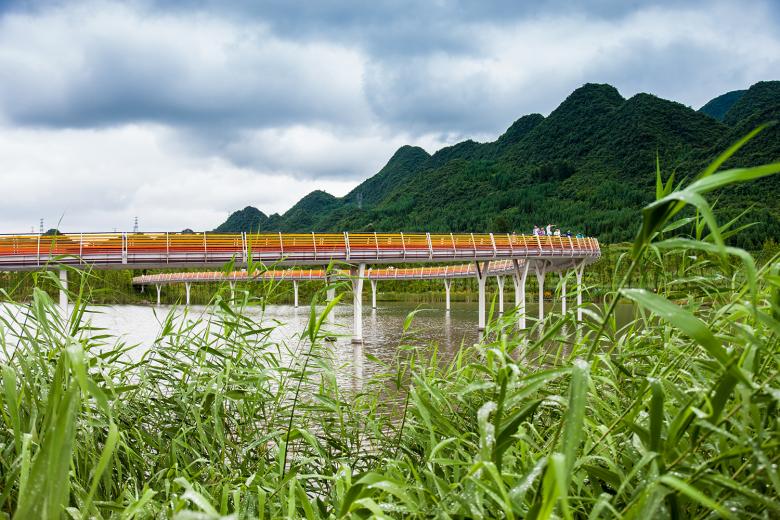 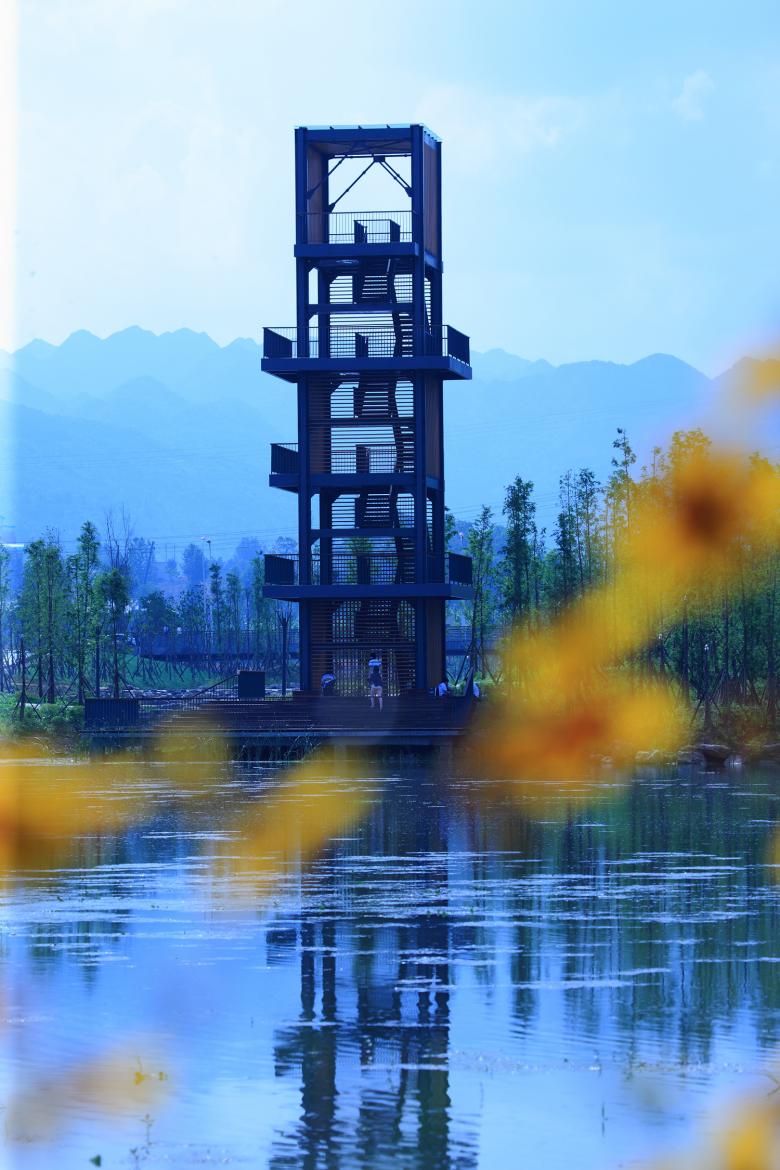 1 Project Statement
Through a series of regenerative design techniques, particularly measures to slow down the flow of storm-water, a channelized concrete river and a deteriorated peri-urban site have been transformed into a nationally celebrated wetland park that functions as a major part of the city-wide ecological infrastructure planned to provide multiple ecosystem services, including storm-water management, water cleansing, and recovery of native habitats, as well as a creation of a cherished public space for gathering and aesthetic enjoyment.

Liupanshui, known for its cool plateau climate, is an industrial city built in mid 1960s in a valley surrounded by limestone hills, with the River Shuichenghe running though it. With an area of 60 square kilometers, the city is densely inhabited by a population of 0.6 million. As an element of a major campaign of environmental improvement the city government commissioned the landscape architect to develop a holistic strategy to address multiple serious problems including: 1) Water pollution: As one of the major heavy industrial cities built during the cold war period, Liupanshui has been dominated by coal, steel and cement industries. Consequently, the citizens have suffered with the resulting by air and water pollution for a long time. From the industrial chimneys, decades of air pollution deposits fell onto the surrounding slopes and washed into the river along with the storm-water that also carries the chemical fertilizer runoffs from the farm land on the slopes and sewage from the scattered settlements on the slope; 2) Flood and storm-water inundation: Situated in the valley, the city is subject to floods and storm-water inundation during the monsoon season, but also severe drought in the dry season due to the porous limestone geology; 3) Recovery of the mother river: Channelization of the River Shuichenghe was carried out in the 1970s as a solution to inundation and flooding. The channel transmited the storm-water from upstream but caused even more severe flooding problems downstream. Hence, the former meandering mother river became an ugly concrete, lifeless ditch and its capacity for flood retention and environmental remediation was totally lost; 4) Creation of public space: Recreation and green spaces are inadequate due to the population explosion in the city. The water system that was once a blessing to the city has become a deserted backyard, garbage dump and the dangerous backside of the city. Pedestrian access to a restored green space system is badly needed in such a densely populated community.
The strategy is to slow the flow of water from the hillside slopes and create a water-based ecological infrastructure that will retain and remediate the storm-water, and make water the active agent in regenerating a healthy ecosystem to provide natural and cultural services that transform the industrial city into a livable human habitat.

The submitted Liupanshui Minghu Wetland Park project, 90 hectares (222 acres) in size, is the first phase and a major part of the comprehensive ecological infrastructure project planned for the city by the landscape architect.

For the overall ecological infrastructure, the landscape architect focused both on the Shuicheng River drainage basin and the city. Firstly, existing streams, wetlands, and low-lying land are all integrated into a storm-water management and ecological purification system linked by the river, forming a series of water retention ponds and purification wetlands with different capacities. This approach not only minimizes urban flooding but also increases the base flow to sustain river water flow after the rainy season. Secondly, the concrete embankment of the channelized river was removed. A natural riverbank was restored to revitalize the riparian ecology and maximize the river’s self-purification capacity. Thirdly, continuous public spaces were created to contain pedestrian and bicycle paths increasing access to the riverfront. These corridors integrate the urban recreation and ecological spaces. Lastly, the project combines waterfront development and river restoration. The ecological infrastructure catalyzes urban renewal efforts in Liupanshui, significantly increases land values, and enhances urban vitality.

As one of the major projects included in the ecological infrastructure of Liupanshui, the Minghu Wetland Park features ecological restoration of the upper stream section of the channelized river. Minghu Wetland Park was created on a site composed of deteriorated wetland patches, abandoned fish ponds and strips of mismanaged corn fields. Its pre-development condition was dominated by garbage dumps and polluted water. As a demonstration of the ecological infrastructure project, this first phase project was designed using all of the tactics for rebuilding ecological health leading to the recovery of biodiversity and native habitat, retention and water quality improvement of storm-water, and public access to high quality open space, and finally a catalyst for urban development. The specific park elements that achieve these objectives are listed below.

(1) The concrete river embankment was removed to create two ecological zones. One encourages native vegetation to grow within the flood zone and the other establishes conditions for emergent vegetation in the riverbed. Aerating cascades were created along the river to add oxygen that fosters bio-remediation of the nutrient-rich water..

(2) Terraced wetlands and retention ponds were created to reduce peak water flow and regulate the seasonal rainwater. The terraces are inspired by the local farming techniques that catch and retain water and transform steep slopes into productive fields. Their positions, forms and depths were based on geographic information and a water flow analysis. Native vegetation was planted (mostly sown) to establish associations adapted to the various water and soil conditions. These terraced habitats slow the flow of water and speed nutrient removal from the water by microorganism and plant species that use excess nutrients as resources for rapid growth.

(3) Pedestrian paths and bicycle routes are overlaid on the green spaces along the waterways and form a circuit around and between the wetland terraces. Resting platforms with abundant seats, pavilions and a viewing tower are integrated into the designed natural system for universal access. This fosters learning, recreational and aesthetic landscape experiences. An environmental interpretation system was designed to help visitors understand the natural and cultural meaning of the places. Clearly, the most iconic built artifact is a warm-colored rainbow bridge, in contrast with the frequently cool and damp climate. This causeway connects three sides of the central wetland (lake), creating unforgettable walking and gathering places. These have quickly become favored social and recreational environments of the citizens and attract visitors from near and far.

Through these landscape techniques, the deteriorated water system and peri-urban wasteland has been successfully transformed into a high-performance and low maintenance municipal front yard. It beautifully regulates storm-water, cleans contaminated water, restores native habitats for biodiversity, and attracts residents and tourists. It was officially designated as a National Wetland Park in China in 2013.