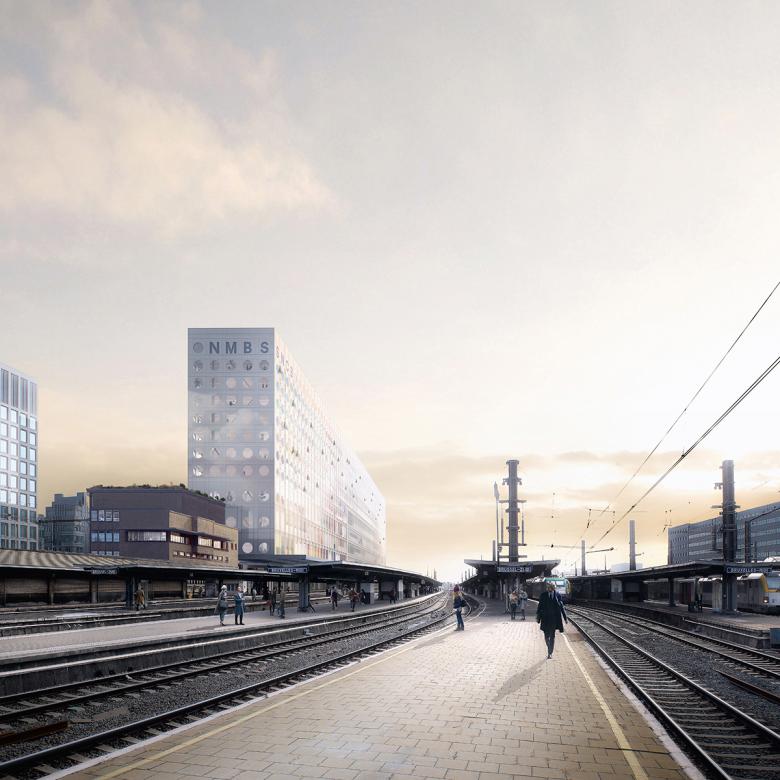 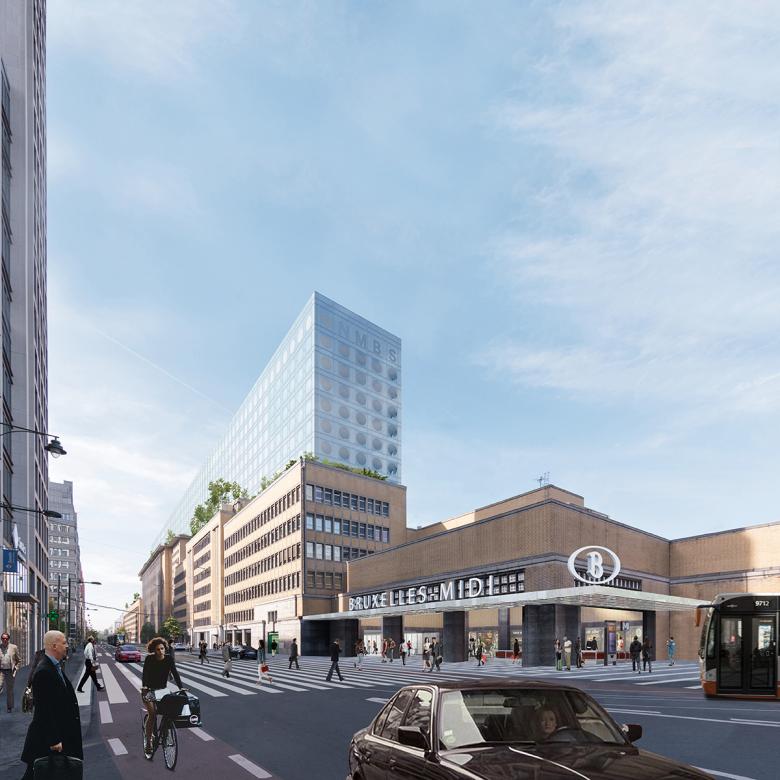 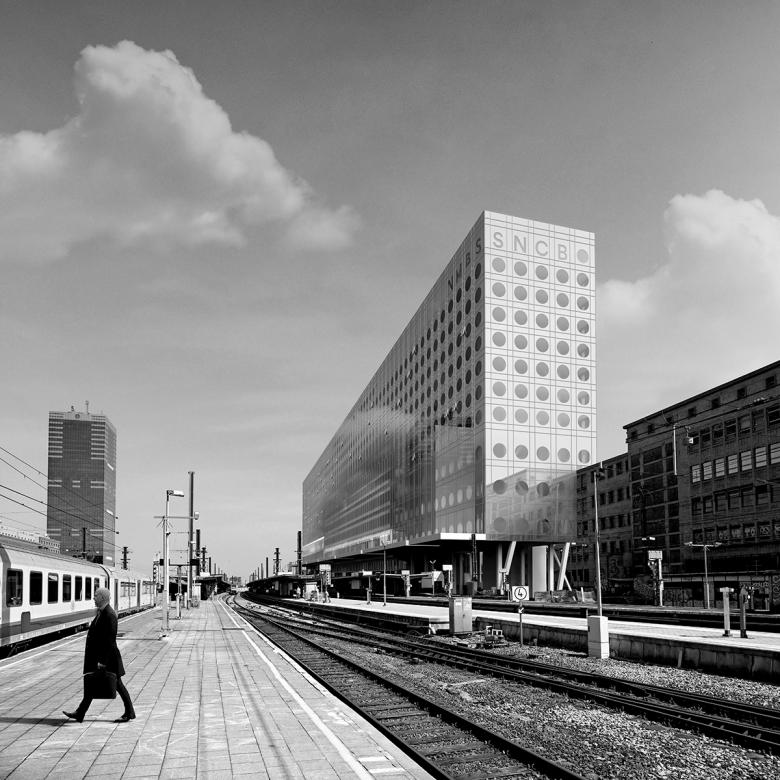 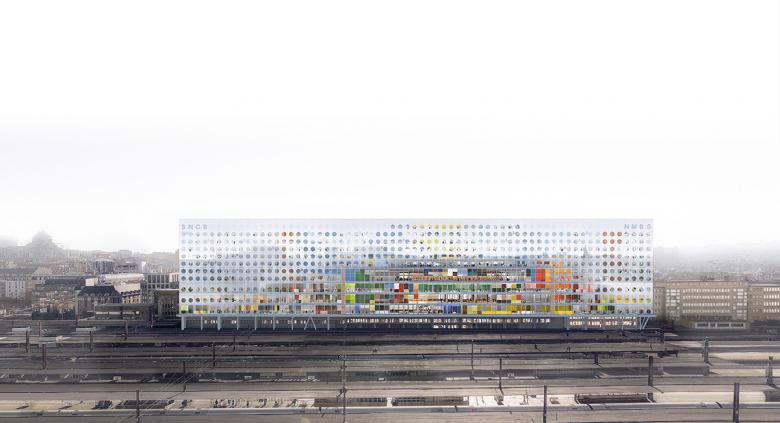 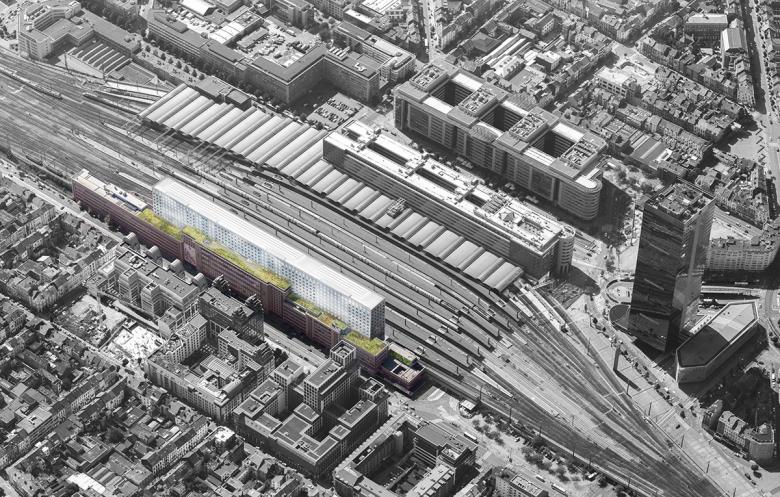 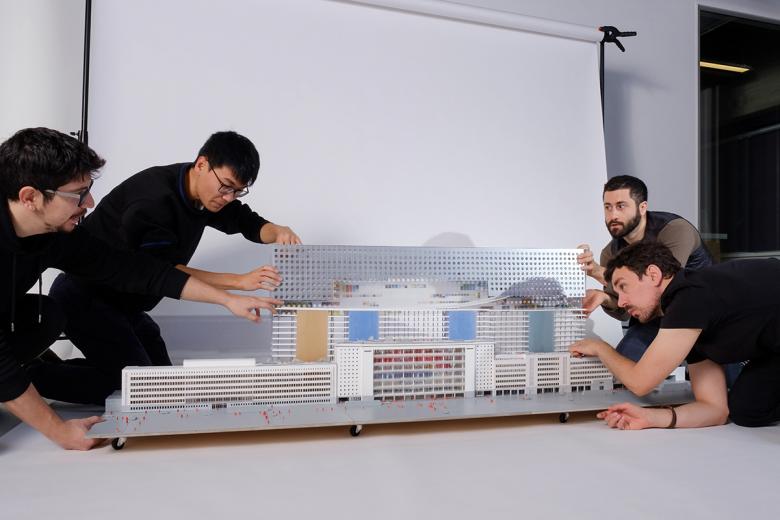 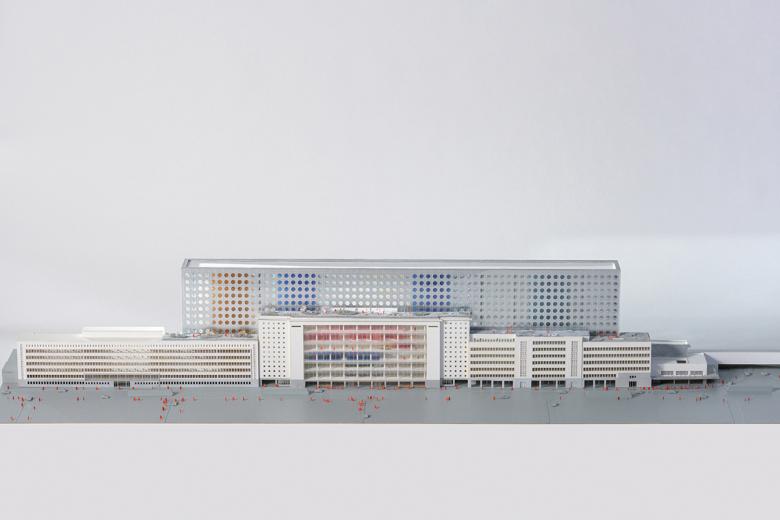 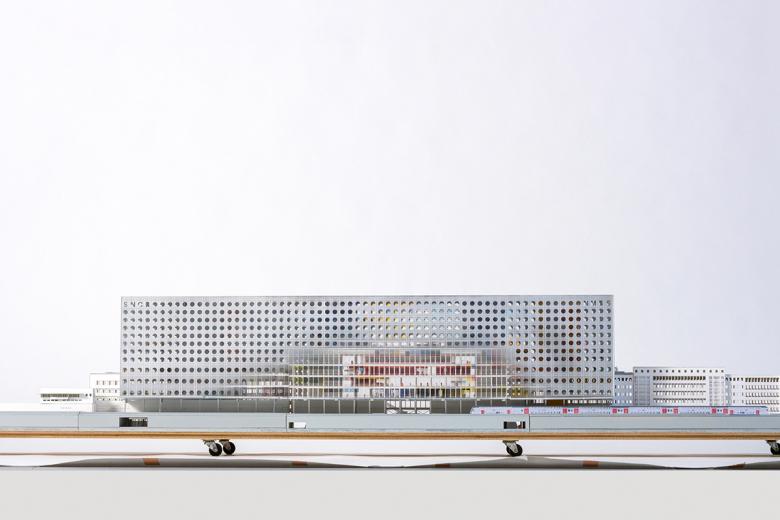 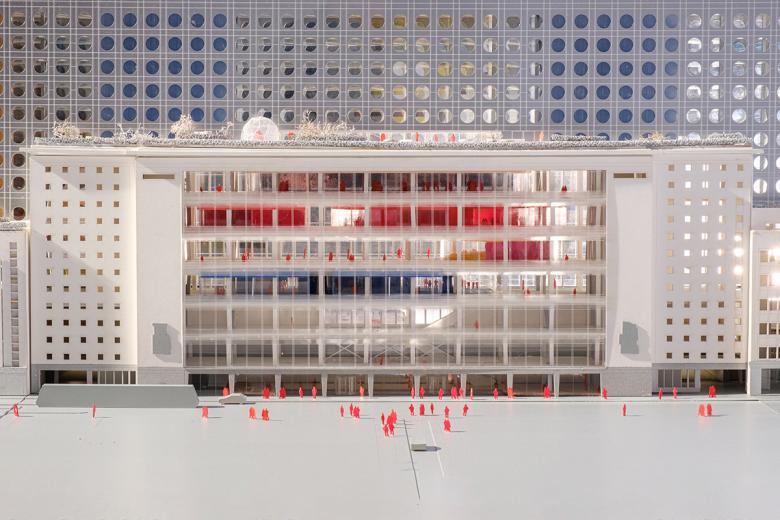 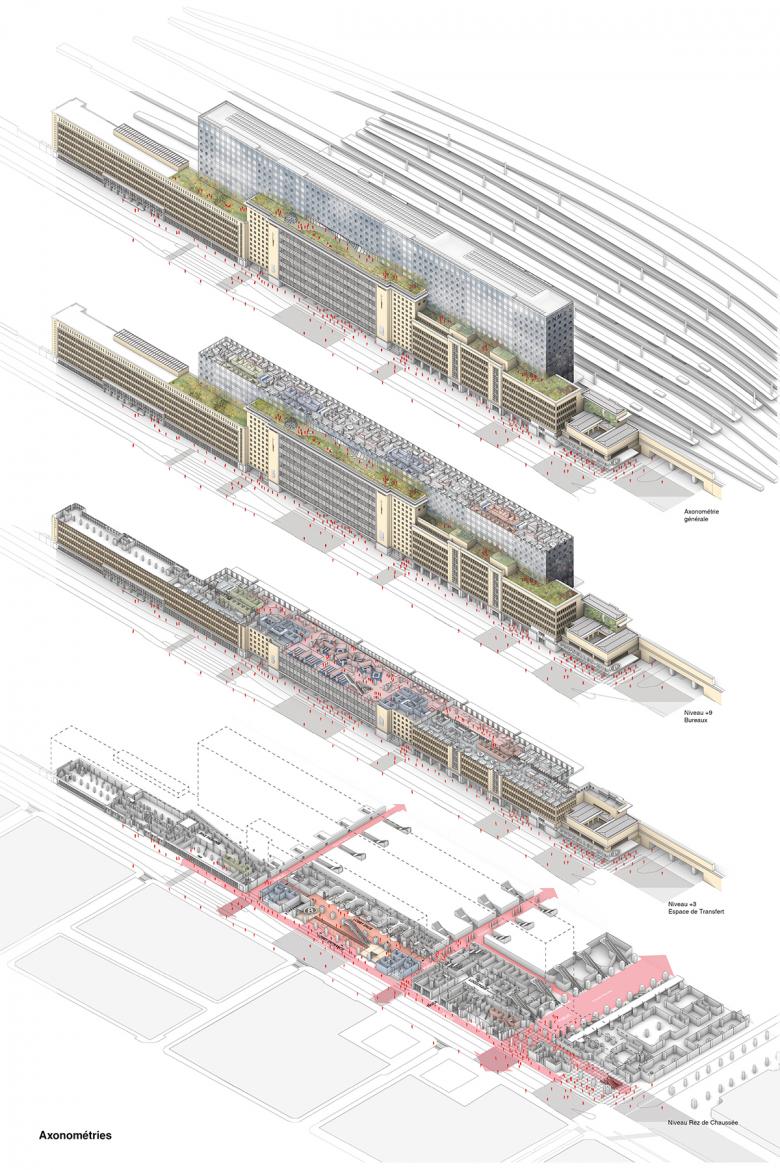 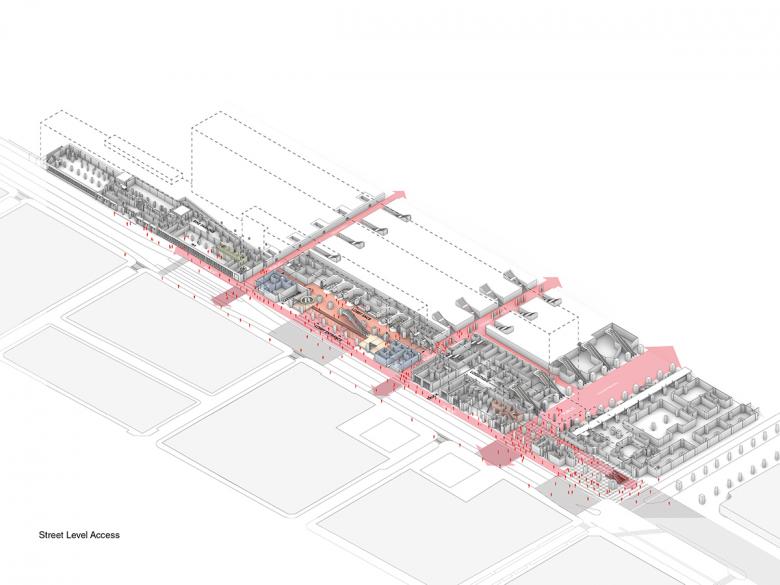 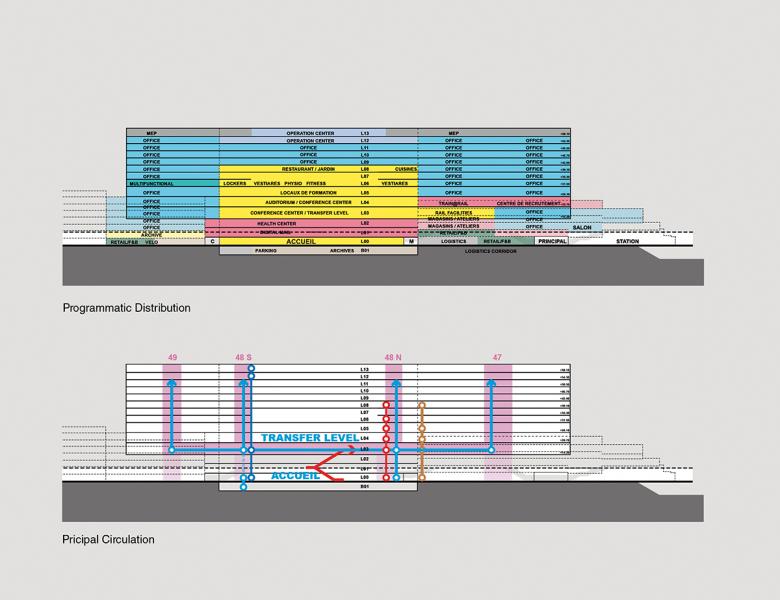 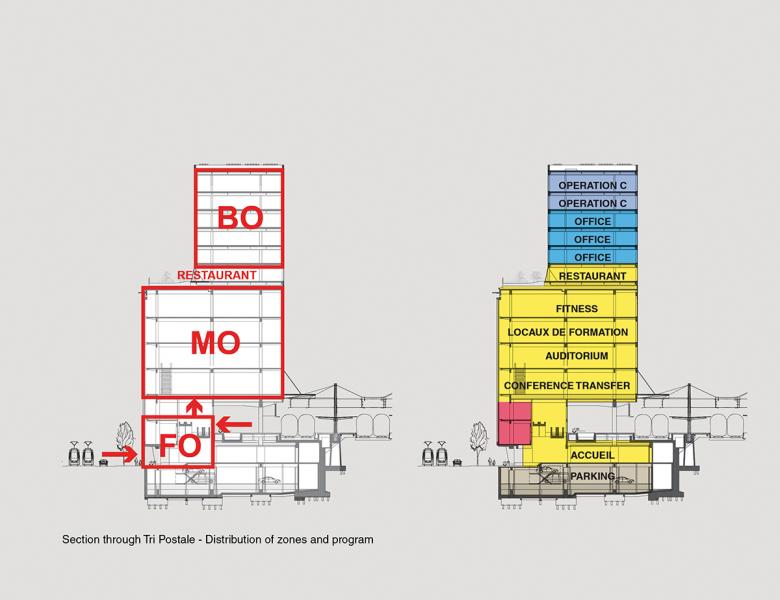 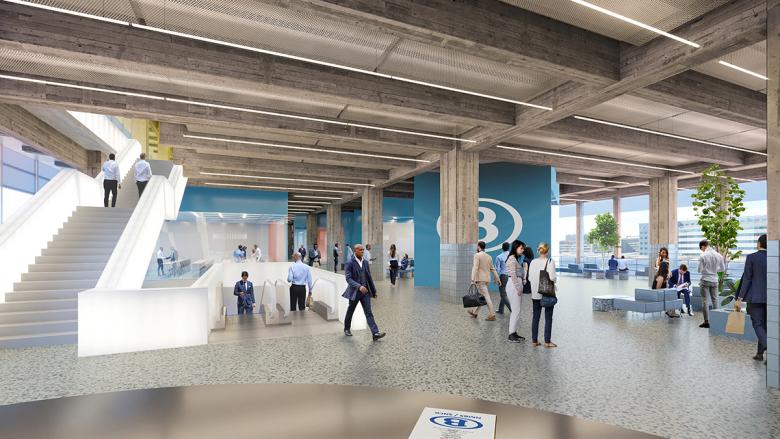 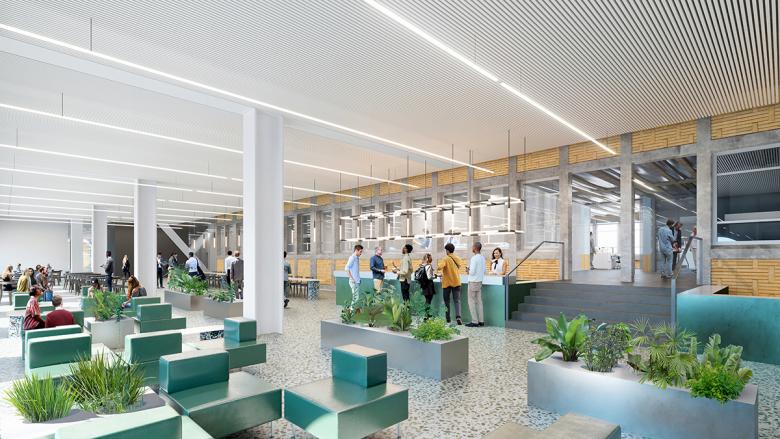 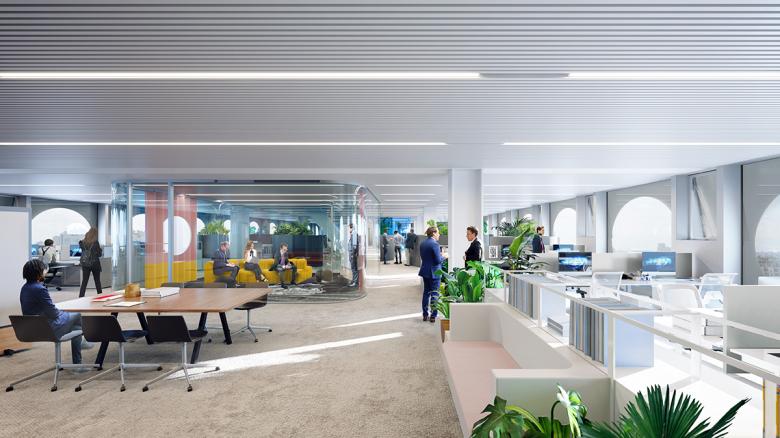 "Contemporary Brussels is both historic and modern, national and European, regional and cosmopolitan. That is its essence – in the mediation between presumed opposites. It is this reality that our project intends to express. It is borne out of the creative tension between an expectation for the future, and a respect for futures past. It embraces the Belgian Brussels, with its early, and often courageous expressions of modern architecture, and the European Brussels, for which the European railway and the Brussels-South stand as symbols." Reinier de Graaf

Three monumental buildings along the Fonsny Avenue have stood vacant for the past two decades. The Tri Postal sorting house and the two office buildings by which it is flanked were once part of the Brussels- South station, at a time when the postal service was more intimately connected with the rail network. The buildings were designed by different architects, and realized as an ensemble on the occasion of the 1958 World’s Fair. Their outward coherence - an expanse of brick - belies the functional autonomy of each building. Their internal logic is agreeably askew, with mismatched floor heights and conflicting grid patterns. These cross-characterful elements are used to full effect in the proposed addition, which seeks to integrate the distinct buildings with a new volume to provide a HQ for the SNCB (National Railway Company of Belgium).

In the proposed recombination, the old and the new buildings add up to 75,000 m2. The total is divided into three formal zones – from the public Front-Office through to the Back-Office, the preserve of the SNCB employees. The public Front-Office is communicated from the street through to the tracks, via a three-story entrance lobby. Retail spaces and visible access points improve the street’s appeal to the passer-by, in line with the municipality’s strategy to inject new life into the neighborhood. The Mid-Office, situated in the former Tri Postal building, includes conference and training rooms, a 200-seat auditorium, a fitness center and a restaurant. The Back-Office areas occupy the two former office buildings and the new volume. Rooftop gardens are quilted across each of the three original buildings.

At 236 by 19 meters in plan, the new volume maintains the horizontal thrust of the original in its bearing to the tracks. At once geological in scale, the building is impressionistic in its effects – the sheer, cliff-like façade is rendered particulate by the articulation of un-fritted portholes. In its openness to the tracks, the building offers a playful disclosure of its inner workings – a move to convey the transparency of the organization to the public it serves. There is no back to the building in conventional terms. In its address, it is full frontal. Two faces, two aspects. A serviceable analogy for the Janus-headed character of modern Brussels. The project aims to effect a sublime contrast between the old, and the not yet old. It proposes an expansion of the original ensemble – making of the three, a little more than the sum of each.