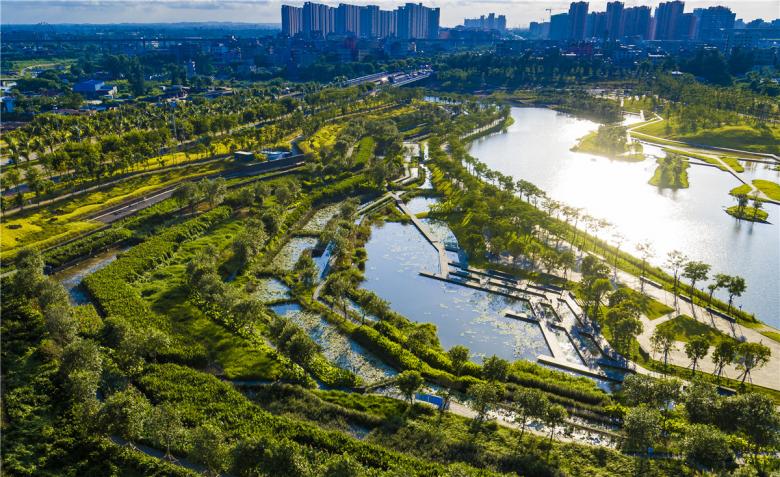 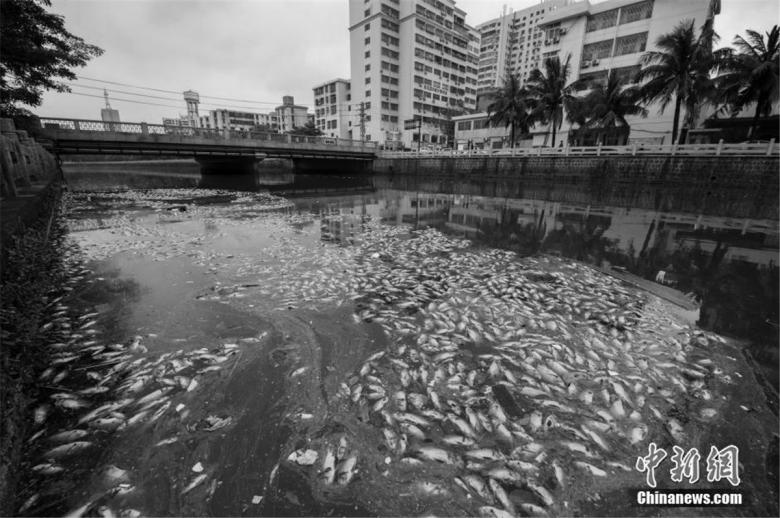 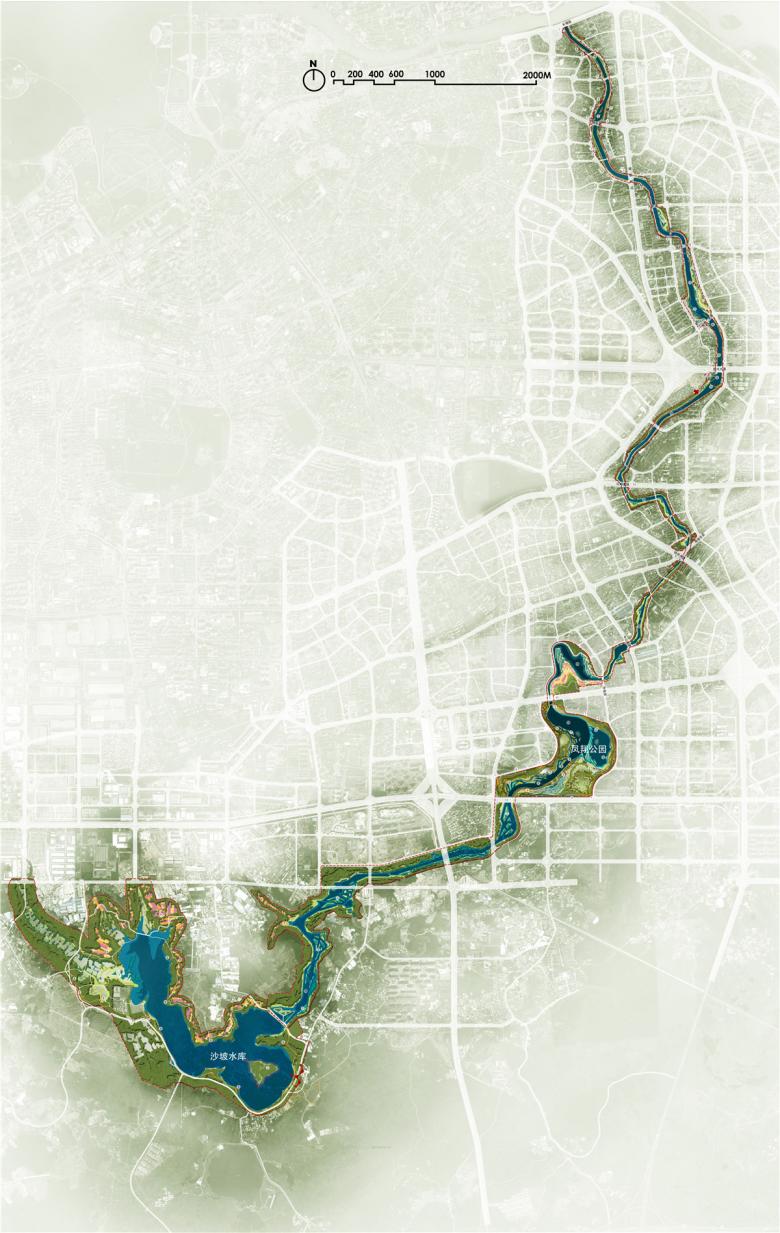 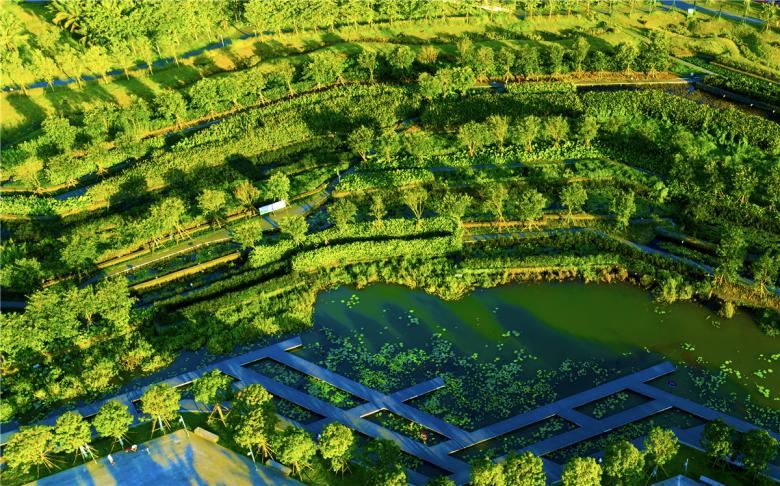 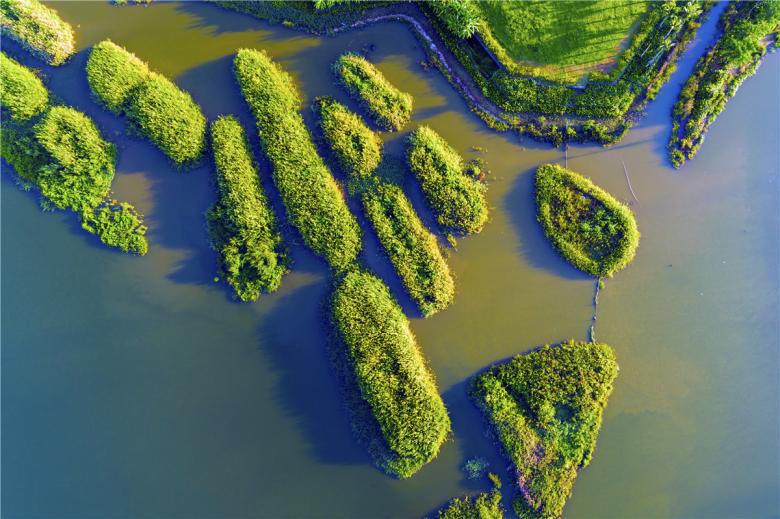 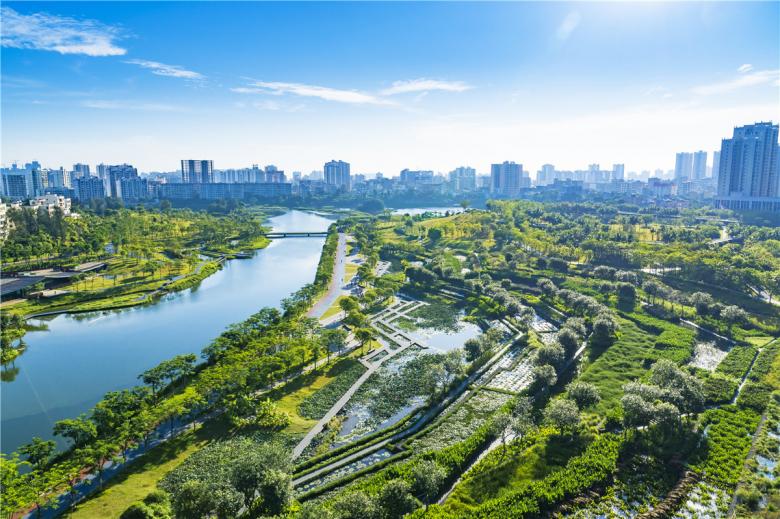 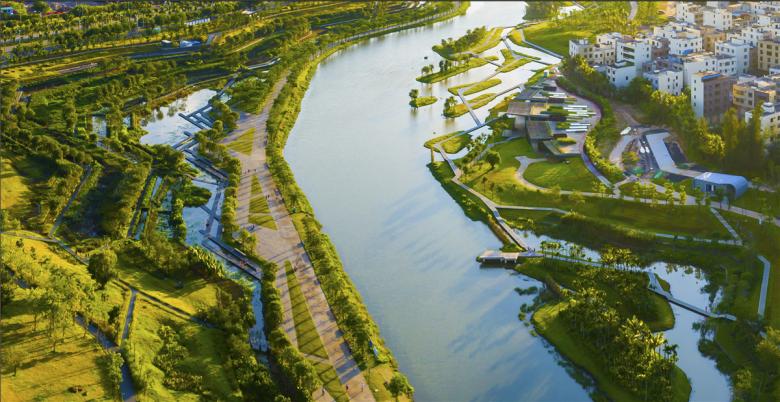 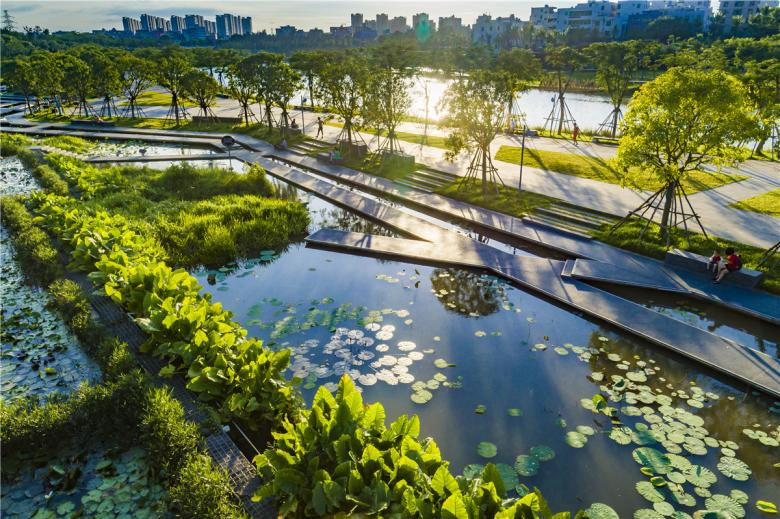 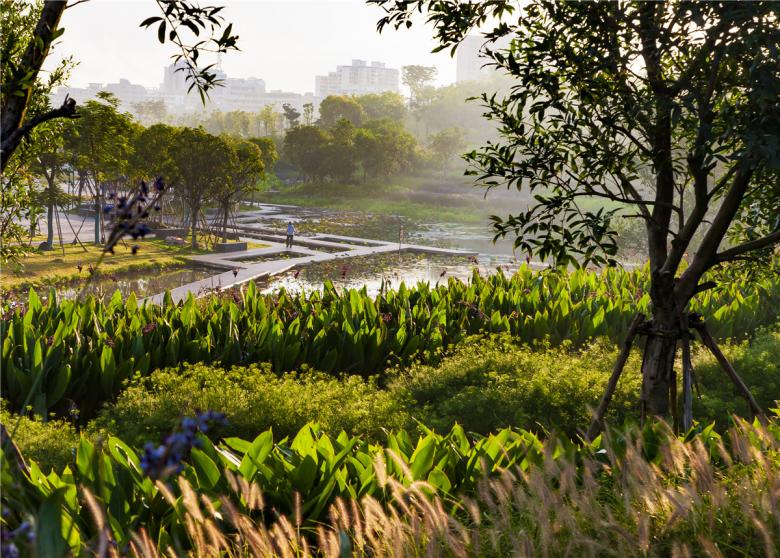 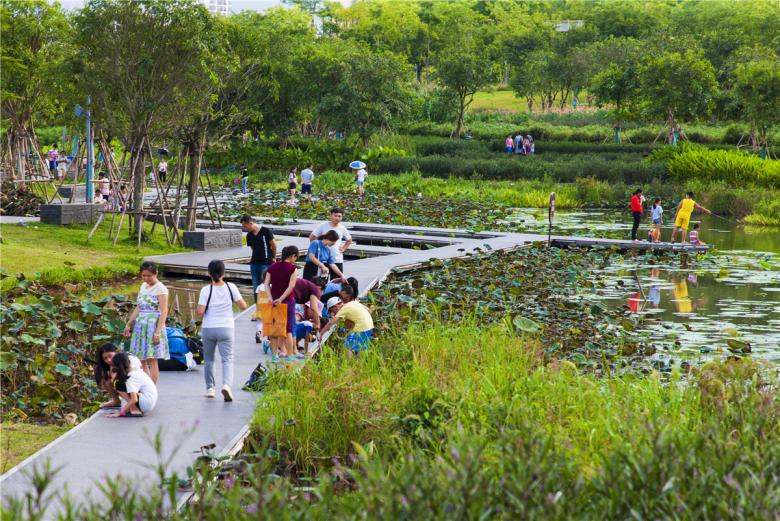 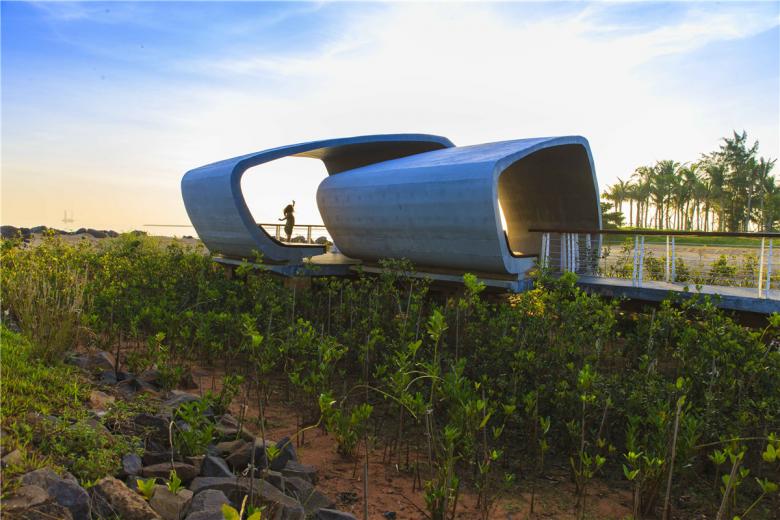 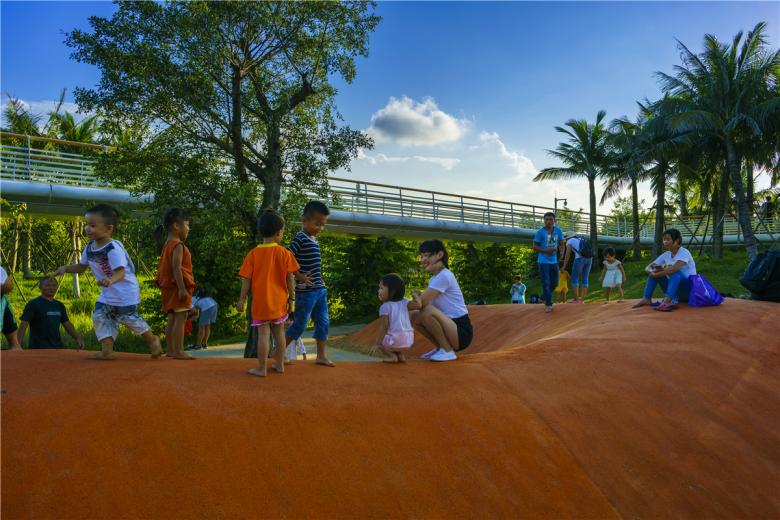 1． Project Statement：
For decades, China’s Haikou City has suffered flood due to the monsoon climate, and water pollution caused by sewage and non-point source pollution from the urban and suburban runoffs. Rivers had been channeled for the single objective of flood control using concrete that turns the waterway lifeless and lack of ecological resiliency. The landscape architect lead the implementation of nature-based solutions to transforming the gray concrete river into a resilient green infrastructure that revives the river with clean water, rich lives, lush beauty, and social vitalities. The concrete flood walls have been removed and replaced with ecofriendly and flood resilient waterways, mangrove habitats have been rehabilitated, constructed wetlands have been built along the river to catch and cleanse contaminated run offs, and recreational facilities have been integrated into the ecological infrastructure. The nature-based solutions showcased in this project are replicable and can be executed inexpensively and at extensive scale.

2．Site and Challenges
Haikou is a tourist city in South China’s tropical area with a monsoon climate. In the past four decades, the city has experienced a frenzied ten-times growth in population from a quarter million to 2.3 million. Compared to the sprouting skyscrapers, little attention was paid to the natural water system and the urban water infrastructure which are critical for a city in a monsoon climate. The Meishe River water ways in particular, 23 kilometers long, literally meaning the “beautiful mother river” in local language, which runs through the built up area had become a nightmare for the city, for decades, a sewage dump. The single-minded counter flooding control walls had turned the river into a lifeless concrete channel that people turned their backs on. For many years, piecemeal solutions were attempted such as building walls and locks to control floods and sea tides, river bed dredging, growing flowers and putting lawns at the river bank, locking off the polluted tributaries, etc. But all these measures only worsened the situation. Images of black water, dead fish and concrete flood walls were broadcast nationwide on China’s Central Television. For a tourist beach city, this was shameful.
In 2016, the Haikou government decided to make a change, this time in a holistic and systematic way. The landscape architect was commissioned to lead the mission of recovering the mother river and other waterways. The presented project includes the Meishehe River corridor of 13 kilometers long that runs through the densely built area, the 80 hectare (about 200 acre) Fengxiang Park on the river corridor, the lower reach of Wuyuan River as part of the same commissioned grey-into-green project, which all together make up the major part of the planned green infrastructure for the city of Haikou.

3. Objectives and design Strategies
By integrating the works of civil engineering that deal with a gray drainage system of sewage pipes and treatment plants that will collect the sewage of the point sources, and cut off some major pollution sources, the landscape architect designed the river corridor as a comprehensive ecological infrastructure to solve holistically the problems of flood and pollution, recover habitats for biodiversity, create pleasant recreation opportunities, and make it beautiful. Three strategies were adopted:
(1)Planning an ecological infrastructure: Based on terrain, land use, and hydrological process, a stormwater drainage-centered green system, namely the green sponge, was planned to separate the stormwater from the sewage, so as to integrate the river and all its tributaries, wetland, and all built and potential green spaces. The green sponge is also integrated with an inter-connected pedestrian and recreational network.
(2) Transforming grey into green: wherever possible, green spaces are given to the water: the concrete flood walls were removed and replaced with an eco-friendly river bank. The blocked water way is reconnected to the ocean to allow tides to again enter the city; wetlands and shallow shores along the river were reconstructed so that mangroves could rehabilitate them. Continuous elevated pedestrian paths were designed to create waterfront access.
(3) Integrating grey into green and the terraced wetland park: Interconnected terraces of constructed subsurface flow wetlands are built along the river bank, formerly occupied by a concrete flood wall and garbage dump. The terraces are designed as water cleansing facilities. Two type of water flow into the wetland to be cleansed: The non-point source pollution water runoffs that carry rich nutrients, and sewage from the local urban villages that currently are unable to access the centralized sewage treatment system. In the former case, the wetland can clean 6000 tons of urban runoff daily from grade V to III, which is swimmable; In the latter case, tests show that 3,500 tons of domestic sewage can be cleansed to the same quality daily. For this, mobile pretreatment equipment is installed at the wetland inlet to remove the smell and pathogens that may cause a public health risk, before the grey water is channeled into the wetland. The two flows can be switched alternately or combined according to demands. The biomass from the wetland is harvested and regularly decomposed into fertilizers for use in the landscape. It is tested regularly to make sure that the water quality is safe and clean for public uses

(4) Harvesting cultural and social services from improved landscape: Integrated into this ecology of resilient water is an interpretative environmental system and resting places to enjoy the landscape services allow visitors to have a unique experience of the designed ecologies. Pavilions in simple form are allocated along the greenway that are designed to provide shelter and shade against the strong tropical monsoon storm and extremely hot summer. They are inspired by the form of waves and float above the rehabilitated mangrove at the waterway and function as resting places as well as artistic installations that allow visitor to enjoy the view and provide focal points in the lush green.

4．Achievement and significance
The project is a great success: the river water has become clean again, fish and birds have returned, mangrove are reestablished, and the water is again the city’s heart; tens of thousands of visitors are attracted to the new landscape. And to celebrate the recovery of the beauty of its mother river which was only a memory for the city decades ago, Haikou was honored as one of the 18 International Wetland Cities by the Contracting Parties to the Ramsar Convention in 2018.
But what is more significant is that the nature-based solutions showcased in this project are replicable and can be executed inexpensively and at extensive scale. Globally, over 85% of sewage in urban areas, mainly in developing countries, is untreated, polluting rivers, lakes and oceans, and worsening the water shortage. 75% of the surface water is polluted in China, mainly caused by non-point source pollution source pollution including urban and suburban runoffs. While centralized sewage treatment systems are economically unfeasible for some urban villages and isolated settlements, nature-based solutions can play an important role in remediating water quality and floods, as well as creating public spaces that provide cultural and social services. It is a whole new territory with great potential for the practice and education of landscape architecture.